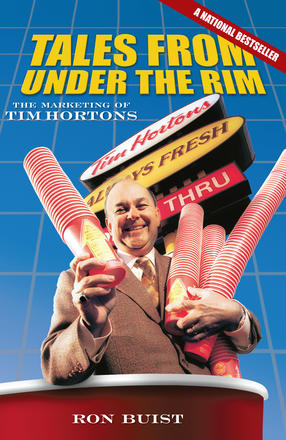 Tales from Under the Rim

Tales from Under the Rim

"On a Rrrroll! You may not be familiar with Ron Buist, but you know his handiwork. " — The Ottawa Citizen.

"On a Rrrroll! You may not be familiar with Ron Buist, but you know his handiwork. " — The Ottawa Citizen.

Tales from Under the Rim is a behind-the-scenes look at a simple business that became a Canadian icon. Tales from Under the Rim chronicles the rise of Tim Hortons, from its humble beginnings to a national institution. The recipe was simple: it took "one hockey player, one favourite barber shop, one former drummer, and one police officer" plus "the luck hard work brings" to transform a once unknown donut shop into one of Canada's leading franchise operations.

In this bestselling business memoir, Ron Buist shows how Tim Hortons became a second home to millions of Canadians. It includes the grass-roots marketing strategy that defined the early years, the Tim Hortons habit of listening to customers, and the whole story of Roll Up the Rim to Win, the no-frills contest that has become a defining feature of Canadian life.

Ron Buist worked in radio and television in Oakville, Ottawa, and Toronto before becoming advertising manager for Black's Camera Stores. There, he was in charge of marketing Black's Bigger Prints, a change in process that that revolutionized photo finishing in Canada. His 13-year experience with Black's helped him land a job with Tim Hortons in 1977, where he worked as the marketing director for 24 years. During that time, he launched some of the best-known and most successful marketing campaigns in Canadian advertising history.

An entrepreneur, author, marketer, and thinker, he is now a highly demanded motivational speaker. He and his wife Mary Ann live in Oakville, Ontario, and have two adult children, Kevin and Suzanne.

"Enlightening peeks into the building of a business empire. "

"Buist's Tales from Under the Rim: The Marketing of Tim Hortons really does reveal the truth behind Tim Hortons success. That is, there is no mystery. "

"The perfect coffee-table book? — a book about coffee. "

"The perfect business gift . .. Like its subject, it is comfortable, friendly, and a predominantly pleasant experience — Christmas morning or any other time. "

"A celebration of the results of marketing at its best. "

"The book's subtitle is bang on. Tim Hortons is many things to this country, but it's above all else a triumph of marketing . ... Buist's version of the rise of Tims holds a lot of common sense lessons that Canadian marketers of all stripes and sizes would do well to commit to memory. "

"A readable and colourful account of the marketing successes that kept Tim Hortons in the forefront of the public mind. ..an interesting and accessible text for students of marketing. "

"The 'mother' of invention. .. A name that is on the lips of most Canadians — though they don't even know it. Along with other brilliant Canadians who've enriched our lives with light bulbs and TV, we raise a cup to you. "