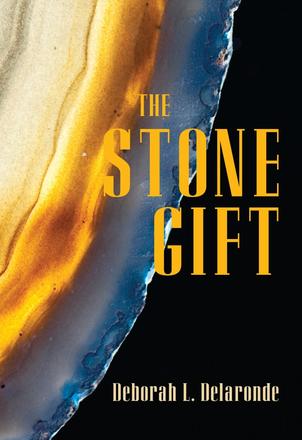 Sixteen-year-old D. J. awakens from a coma with no memory of who he is or what happened to him. All he knows is that he was severely beaten and his face is disfigured. D. J.'s grandmother places an unearthly stone necklace around his neck and he begins to recover at a rapid ... Read more

Sixteen-year-old D. J. awakens from a coma with no memory of who he is or what happened to him. All he knows is that he was severely beaten and his face is disfigured. D. J.'s grandmother places an unearthly stone necklace around his neck and he begins to recover at a rapid pace. When D. J. has visions about a boy named Jeff and his friend Tim, he starts to piece together the events that landed him in the hospital. The Stone Gift is a tale about standing strong in the face of gang violence while embracing friendship, love, family, and even magic, in order to heal.

Deborah L. Delaronde-Falk lives in central Manitoba on a cattle ranch along the western shores of Lake Winnipegosis. She honours her Metis heritage by writing and publishing under her maiden name. Deborah's twelve published stories except for Friendship Bay and The Rabbit's Race focus around Metis protagonists with story situations that she hopes will convey the way of life of the Metis people in both a historical and contemporary context. Louis Riel Day: The Fur Trade Project is Deborah's twelfth book. Deborah retired as a children's librarian having worked for twenty-six years at Duck Bay School in the community of Duck Bay, Manitoba. She earned her employer Frontier School Division's 'Outstanding Contribution Award' and the prestigious 'Lieutenant Governor's Medal for Literacy' Award presented by The Honourable Peter M. Liba', Lieutenant Governor of Manitoba. Deborah is the first recipient of the 'Beatrice Mosionier Aboriginal Writer of the Year Award, 2015.

The bandaged fingers shifted slightly over the bed sheet. "Good morning," a soft-spoken voice said. "Are you awake?""I can't see," he said, his voice barely above a whisper. "I wouldn't be able to see either if I had all those bandagescovering my face," she teased. The young man became agitated. He struggled to draw a fewshallow breaths. "You're in the ICU at the Regent General Hospital," the friendlyyoung woman's voice said. "I'll notify Dr. Ritter that you're awake. He'llbe relieved and will want to speak with you. ""What happened?" he asked. His throat was dry. The words sounded brittle. His head pounded. He could feel his face pulsing. "I believe that your parents and Dr. Ritter had better answer thatquestion," she replied. An overwhelming urgency to know gripped him. "I have to get out of here," he said, straining to get up. "I'm notsure why but I know I have to leave. ""Please don't try to move," she said. "You might rip your stitches. "The voice had a calming effect. It made him feel safe. "Thirsty," he said and licked his lips. "I'll be right back," she said. Her voice faded as she walked out thedoor. 2 Deborah L. DelarondeHe sensed that he's alone in the room. He could even hear theintercom paging Dr. Ritter and the muffled drone of far-awayconversations. He could taste bile rising at the back of his throat. He couldn't seebut he could still feel so before the doctor arrived, he decided to checkif he was missing any of his body parts. He wiggled his fingerscounting first on his right and then left hand. He raised his right arm. Then his left arm. He wiggled the toes on his right foot and lifted hisleg. He could feel and hear movement on the bed sheet. When he triedto wiggle his toes and move his left leg, he felt nothing. He strainedto hear the sound of his leg moving over the starched sheet. He heardnothing. Panic set in again when he heard a woman's voice, "Oh, ThankGod, D. J., we've been worried sick and thinking the worse. ""Water?" he said, this time, a little more forcefully. "There's a jug of water on the bed stand but you're going to needa straw," the woman said. He could hear the soles of her shoes squeaking as she left theroom. Why did she call me D. J.? he wondered. "Well, young man," a deep male voice interrupted his thoughts. "You had us very concerned. ""I'm Dr. Ritter," the male voice said. "I just need to ask you a fewquestions and then we'll wait for your mom to return. ""First question, do you know where you are?" Dr. Ritter asked. "In a hospital?" he answered with a scratchy voice. "Great," Dr. Ritter said, then continued his questioning. "Can youremember your name?"The Stone Gift 3"The woman that you said was my mom just called me D. J.," hereplied. "What happened that brought you to the hospital?" Dr. Ritterasked. "I don't know," he mumbled his answer. "I can't remember. ""Here's your water, dear," his mom said, her shoes squeaking tohis bed. He felt a straw placed between his lips. His lips grabbed at the straw. He hungrily drew in the water. "You don't recognize your mother's voice?" Dr. Ritter asked. "No," he replied, pushing the straw away with a bandaged hand. "I didn't even know my own name until a few minutes ago. "First things first, he had to know. "What happened?" he asked. The gripping panic threatened tooverwhelm him again. "Why can't I feel my leg?""I'm here," another man said, breathless. "Hannah told me he wasawake. ""Do you recognize this man's voice?" Dr. Ritter asked. "No," he replied. "What's going on?"Who am I? was his last thought.

Other titles by Deborah L. Delaronde