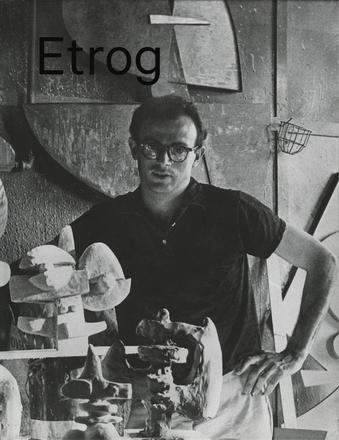 Etrog's work dots the urban landscape in Toronto and many other urban centres in Canada and shows an overriding concern for the human body's transformation in an increasingly mechanized world.

Etrog's work dots the urban landscape in Toronto and many other urban centres in Canada and shows an overriding concern for the human body's transformation in an increasingly mechanized world.

Sorel Etrog (1933-2015) is a renowned Canadian sculptor and painter. He left his native Romania for Israel in 1950, where he studied at the Tel Aviv Art Institute. From Tel Aviv, he moved to New York and in 1963 to Toronto.

Etrog represented Canada at the Venice Biennale in 1966. He created major public commissions for Expo 67, the Sun Life Centre, the Los Angeles County Museum, and the Olympic Park in Seoul, Korea, and he designed the Canadian Film Awards' statuette (originally known as the "Etrog"). His drawings and watercolours explore mechanics and biology: mechanistic bodies, wrench-shaped hands, pure machines, blends, labyrinths, and monsters.

Sorel Etrog: Five Decades was published in 2013 to accompany the last major retrospective exhibition of his work. It includes his archetypal sculptures as well as drawings, paintings, book illustrations, and prints, as well as images from his rarely seen film, Spiral. The book also includes texts by Ihor Holubizky and critics Gary Michael Dault and Florian Rodari, as well as Marshall McLuhan, Sir Philip Hendy, Theodore Allen Heinrich, and William J. Withrow that explore the depth and range of his work.

Etrog's work is included in major collections worldwide, including those of the Museum of Modern Art, New York; the Guggenheim Museum, New York; the Musée d'Art Moderne, Paris; the Museo Novecento, Florence; and the Tate Gallery, London.

Ihor Holubizky is the senior curator at the McMaster Museum of Art, McMaster University. He received his PhD in art history from the University of Queensland, Brisbane, Australia. Holubizky has contributed to numerous publications, catalogues, and journals in Canada, the United States, Europe, and Australia over the past thirty-five years.

Other titles by Ihor Holubizky