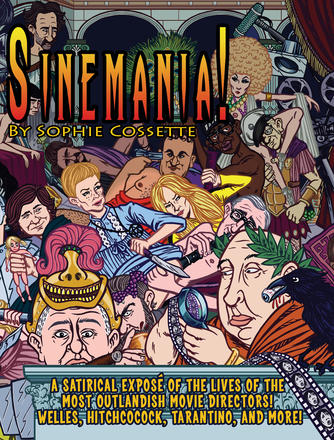 Instead of focusing attention on the stars in front of the cameras, this highly imaginative collection of illustrated stories shines the spotlight on the cinematic artists behind the scenes. The book features graphic interpretations of the lives and careers of 23 North American ... Read more

Instead of focusing attention on the stars in front of the cameras, this highly imaginative collection of illustrated stories shines the spotlight on the cinematic artists behind the scenes. The book features graphic interpretations of the lives and careers of 23 North American and European directors from the past and present, including Woody Allen, Alfred Hitchcock, Roman Polanski, Quentin Tarantino, and Orson Welles. With unsparing, yet affectionate drawings and prose, it portrays the twisted genius, rampant egos, and weird behavioral traits shared by so many notorious filmmakers. Additionally, the best movies by directors not necessarily chronicled in the book—such as Federico Fellini, Stanley Kubrick, David Lynch, Martin Scorsese, and Billy Wilder—are represented with biographical stories, one-page illustrations, and succinct, witty film descriptions.

Sophie Cossette is originally from Montreal, Quebec, and currently lives in Toronto, Ontario. Having drawn since childhood, she began seriously cartooning in the early ’90s, specializing in x-rated comics, and contributed material to local, American, and British publications. She was nominated for the Doug Wright Award for Best Emerging Talent for illustrating Mendacity (written by Tamara Faith Berger, Kiss Machine, 2006).

“Sinemania! focuses a loving if jaundiced eye to all things filmic, from the silents through the evocation of the silents (the “tribute” to Rudolf Nureyev as Rudolph Valentino is a pip) in the ’70s, to something that comes within a decade or so of what we consider “modern day” in its nod to the career of Steve Buscemi. Along the way, it manages to more or less constantly entertain, occasionally instruct, and even momentarily enchant (Dietrich’s gypsified image from Touch of Evil barking out at Orson Welles, “Your future is all used up! Why don’t you go home?” jumps off the page). Which is pretty damned good if you ask me. ” — New York Journal of Books

“What serious film lover hasn’t wondered how Spike Lee might unload on Woody Allen at Cannes? Or wanted to be a fly on the wall as Sam Peckinpah and Rainer Werner Fassbinder duke it out over who was the biggest badass? Cossette’s appetite for perverse parody is happily limitless. ” —NOW Magazine