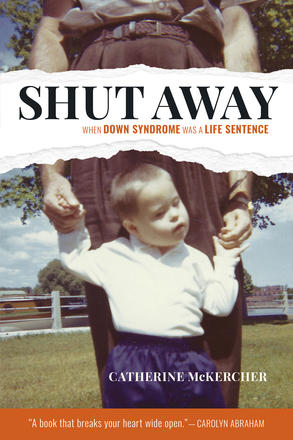 An explosive book that exposes the abuses of institutionalization.

"How many brothers and sisters do you have?" It was one of the first questions kids asked each other when Catherine McKercher was a child. She never knew how to answer it.

An explosive book that exposes the abuses of institutionalization.

"How many brothers and sisters do you have?" It was one of the first questions kids asked each other when Catherine McKercher was a child. She never knew how to answer it.

Three of the McKercher children lived at home. The fourth, her youngest brother, Bill, did not. Bill was born with Down syndrome. When he was two and a half, his parents took him to the Ontario Hospital School in Smiths Falls and left him there. Like thousands of other families, they exiled a child with disabilities from home, family, and community.

The rupture in her family always troubled McKercher. Following Bill's death in 1995, and after the sprawling institution where he lived had closed, she applied for a copy of Bill's resident file. What she found shocked her.

Drawing on primary documents and extensive interviews, McKercher reconstructs Bill's story and explores the clinical and public debates about institutionalization: the pressure to "shut away" children with disabilities, the institutions that overlooked and sometimes condoned neglect and abuse, and the people who exposed these failures and championed a different approach.

Catherine McKercher worked as a journalist, including a stint as the Washington correspondent for the Canadian Press, before joining the journalism faculty at Carleton University. She has authored and co-authored numerous books and articles, among them The Canadian Reporter: News Writing and Reporting.

"A gut-wrenching chronicle of a not-so-distant history, when society warehoused its most vulnerable members. With grace and clairty, McKercher turns in a courageous memoir as she investigates what happened to her baby brother Bill, who was born with Down Syndrome in the 1950s. Sent to a "hospital school" from the age of two, Bill becomes the powerful lens through which McKercher explores her family's experience. Unsentimental and unflinching, Shut Away will make you weep for all the Bills and the crucial lessons humanity cannot afford to ignore from his story. "

"A gut-punch of a story, placed atop the steady, never-preachy subnarrative of McKercher’s book: We can do better. "

"McKercher writes this extraordinary book from the inside. It’s not, as one might expect, full of rancour. It is forgiving and empathetic of the players, but it pulls no punches in identifying the moving parts of a system that failed her brother Bill and thousands like him. . .. Heartbreaking. "

"McKercher's meticulous research and precise, understated prose creates an unforgettable history of children placed in overcrowded, understaffed, and sometimes violent living conditions, and a searingly honest portrait of a family ruptured by the decision to send Bill away. Above all, Shut Away is a moving portrait of a brother. "

"McKercher's compelling and moving memoir illuminates the harsh realities of life in a long-stay residential facility, as well as the familial impact of the fateful decision to send her brother away. "