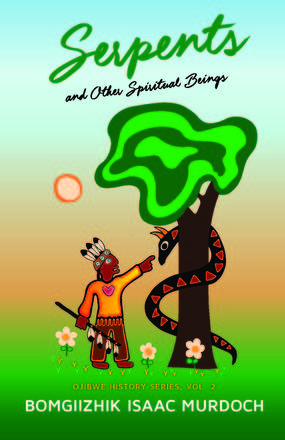 Serpents and Other Spiritual Beings

Serpents and Other Spiritual Beings

Serpents and Other Spiritual Beings is the second book in a series by renowned Ojibwe storyteller Bomgiizhik Isaac Murdoch, following on The Trail of Nenaboozhoo and Other Creation Stories (2019). Serpents and Other Spiritual Beings is a collection of traditional Ojibwe/Anishinaabe stories transliterated directly from Murdoch's oral storytelling. Part history, legend, and mythology, these are stories of tradition, magic and transformation, morality and object lessons, involving powerful spirit-beings in serpent form. The stories appear in both English and Anishinaabemowin, with translations by Patricia BigGeorge. Murdoch's traditional-style Ojibwe artwork provides beautiful illustrations throughout.

Isaac Murdoch, whose Ojibway name is Bombgiizhik is from the fish clan and is from Serpent River First Nation. Isaac is well respected as a storyteller and traditional knowledge holder. He has committed his life to the preservation of Anishinaabe cultural practices and has spent years learning directly from Elders.

Patricia BigGeorge is an Anishinaabemowin speaker and translator.

Serpent Stories- Introduction
You can't really talk about serpents without talking about thunderbirds, they kind of go hand-in-hand. It's almost like you can't really talk about a buffalo hunter without talking about a buffalo. The reason why I wanted to talk about serpents is because I remember years ago the Elders would gather and they would have ceremonies at the river and the different lakes. They would make this offering, "Zenibaanh mitigoonsag" they used to call it. Which was ribbons and sticks. They'd make these offerings to the serpents inside the rivers and the lakes. They say that there's a tunnel system that zigzags across the land underneath the ground, and in this tunnel system is where the serpents and the underwater beings travel. Where these tunnels come up into the lakes, that's where our people would make those offerings. Most of us have heard about the stories of these tunnels that go underneath, wherever that tunnel came up was a very sacred place for our people. We would fast there for knowledge because we know that there's something down below, something very powerful.
The serpent was often called upon during times of war, famine, disease. It was called upon so that we could have good health and be protected. During the NODAPL (No Dakota Access Pipe Line) and during this whole pipeline/anti-pipeline movement, there's often a lot of talk about "kill the black snake. " As an Anishinaabek, I was raised to believe different. Every culture has its own way of thinking and believing, it's all a piece of the puzzle. For the Anishinaabek in my region, we believe that the serpent is a very powerful being. As humans, as two-legged people, we'd never be able to kill something like that.
The power that's down there is very critical for the balance of this Earth. When the thunderbirds and the serpents fight, when they feed off each other, you know, great medicine gets cast across the land. We get our life from that. The same way that a buffalo hunter has a special relationship with a buffalo, together their hearts are connected, their minds. Yet at the same time the buffalo hunter will kill the buffalo, sometimes the buffalo will kill the Indian. It's the same sort of thing, it's the same sort of relationship.
It was this time of year when we made our offerings to those serpents so that our children could be safe in the waters, so that our families were out living their lives on the land, when we made those petitions, they would be looked after. Parts of our clothes, our garments, would be offered with that bundle so that they would know that a present was offered on their behalf. So, we would take little pieces of our clothes from our children, our babies and all our people and family, and that would be put into that bundle with offerings of tobacco. That was very, very important, that's part of our natural laws. How we govern ourselves in the forest is by making those offerings, so that we can live in a land of spirits.
It's very odd to me when we say, "this is my traditional territory, this is mine!" When we used to trap, we knew that the spirits, the Memegwesiwak, the Chi-ginebig, and the Thunderers lived out there. The different spirits that lived out there, they all had their own homes. We knew that we were only a part of their home. So, it's very odd for me to think that this land is only mine, as a human being. It's not.
Part of the governance is through our offerings; we give offerings all the time. Oh, the Memegwesiwak lived there, the Serpents lived here, Thunderbirds have a nest up there. All the time we're giving, giving, giving to the land, giving to the spirits that are out there. It's a beautiful life. It's how we're able to restore the balance of what we take, is through our offerings.
Of course, there are consequences when you don't do that. If you're trying to be cheap or stingy and not giving your offerings to these things, sometimes there is a price to pay. This land, it lives on the generosity of everything. The rules or the natural laws that the land has is generosity. So, if we keep taking, taking, taking and we don't give anything back. .. well then guess what? We can probably expect some hard times.
They say that the Serpent is forty feet long, it's got little arms and legs, it's got horns sticking out of its head. The bones of the Serpent are made of copper, they say that. They live in families.
Just today I spoke to an amazing friend of mine in Chippewa of The Thames First Nation. I was curious about a Serpent story because apparently, he's seen a serpent. I'm like right on him like white on rice, I'm like "you GOTTA tell me! You gotta tell me what happened, tell me everything!" He told me about what he had seen, and his face went pale when he talked about it because he was very scared. It's a natural reaction that we're supposed to have if we see a serpent. There should be a level of fear and a level of "OMG" right?
The stories I want to tell involve about how people were turned into Serpents under certain circumstances. This is something that has always fascinated me, as a child and growing up, was shape shifting or people that got turned into animals. The Serpent is a very powerful being. They say that it's over forty feet long, it's got arms, legs and horns. It's very powerful, magical and will eat humans if it must.

"'When the Thunderbirds and Serpents fight, they feed off each other, you know great medicine gets cast across the land. We get our life from that. ' So writes storyteller Isaac Murdoch as he shares his Elders' stories about tunnels beneath the earth, rich laws, philosophies, teachings, power from up there, down there, and all around us, until we too hear the thunders as they bring us into the world of wahkotowin, all our relations. How privileged and blessed we are to be able to read the Ahtyokaywina of our people. "
--Maria Campbell, author of Halfbreed

"This writing gives an account of the reality of the Anishinaabe and how the elements of earth, water, air and fire play a sacred role and is bought to life by the language of the people, a language containing a depth of knowledge and blessed by our relatives KIISIS & TIBIIKI KIISIS. "
--PAWAMI NIKITITICIKIW (the Dream Keeper), Wilfred Buck, author of I Have Lived Four Lives

"What is that voice I hear in these stories? Resonant with memory, my body leans in to hear better. What is that voice? Why, it's Granpa's voice I heard as a child by the old stove so long ago. That well beloved voice that instructed us gently with feeling, wonder, and good humour and carried the stories into our lives so we could grow strong and upright. Miigwetch Isaac, for touching that quiet place in the spirit that, despite all this time and all that has happened, still knows, still remembers. "
--Bonnie Devine, Founding Chair of OCAD University's Indigenous Visual Culture program.

"Gather around, for here are oral stories transcribed so they retain the flavour of a narrative spoken aloud, and translated into Anishinaabemowin; perfect for language-learners. I love the way these stories infuse the spirit world into an every-day context, these are not dusty old legends, but a living way of seeing the world around us in the here and now. "
--Nathan Niigan Noodin Adler, author of Ghost Lake 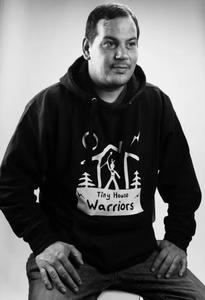 An Interview with Bomgiizhik Isaac Murdoch

Serpents and Other Spiritual Beings (Kegedonce Press) continues the Ojibwe History series that Bomgiizhik Isaac Murdoch started with The Trail of Nenaboozhoo in 2019. We interview Issac about the role Serpents has to play in preserving Anishinaabe language and culture, ... Read more

Other titles by Bomgiizhik Isaac Murdoch