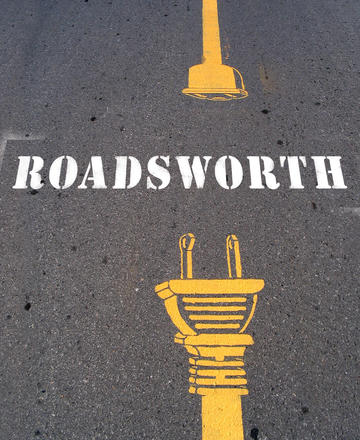 In October 2001, paint was spilled on the streets of Montreal. A stark, primitive bike symbol, looking suspiciously like the one the city used to designate a bike path; a giant zipper, pulled open down the centre line of the street on ... Read more

In October 2001, paint was spilled on the streets of Montreal. A stark, primitive bike symbol, looking suspiciously like the one the city used to designate a bike path; a giant zipper, pulled open down the centre line of the street on a busy commuter route; the footprint of a giant, stomping through the city while people slept.

Inspired by a desire for adventure and galvanized by a loathing of car culture, Roadsworth got down with an idea that had been incubating. The time had come for him to articulate his artistic vision, to challenge the notion of "public" space and whose right it is to use it. By 2004, Roadsworth had pulled off close to 300 pieces of urban art on the streets of Montreal. In the fall, he was charged with 51 counts of public mischief. It seemed to signal the end of his career. Instead the citizens of Montreal and lovers of his work from around the world rallied their support. A year later he was let off with a slap on the wrist.

Since then, Roadsworth has developed as an artist, continuing to intervene in public spaces and to travel the world, executing commissioned work for organizations such as Cirque de Soleil, The Lost O (cycled over in le tour de France), and for municipalities, exhibitions, and arts festivals. In this playful and sometimes subversive book, featuring more than 200 reproductions of his unmistakable work, Roadsworth takes the urban landscape and turns its constituent elements on their heads, both indicting our culture's excesses and celebrating what makes us human (lest we forget).

Bethany Gibson has edited literary fiction for fifteen years. She is the fiction editor of Goose Lane Editions and the mother of three children. She has worked as an agent, as a freelance editor, and as the owner-operator of a manuscript assessment and publishing counsel service.

Scott Burnham is a writer and creative director exploring creativity and innovation at the edges of urban culture and design. His work and entrepreneurial initiatives for organizations and cities around the world is focused on reprogramming our relationship with the city and creating new relationships with its shared objects and areas. He is the author of Finding the Truth in Systems: In Praise of Design Hacking, Urban Play, and The Urban Guide for Alternate Use..