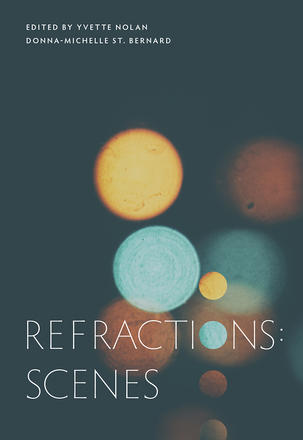 Refractions: Scenes is a collection of scenes from diverse contemporary works by Canadian playwrights that reflect the country’s artistic landscape through a breadth of themes, styles, cultures, regions, and creative practices.

This collection can be used both as a source ... Read more

Refractions: Scenes is a collection of scenes from diverse contemporary works by Canadian playwrights that reflect the country’s artistic landscape through a breadth of themes, styles, cultures, regions, and creative practices.

Yvette Nolan is a playwright, dramaturg, and director. Her plays include Annie Mae’s Movement, The Unplugging, and The Birds. She has been writer-in-residence at Brandon University, Mount Royal College, Saskatoon Public Library, and McGill University, as well as playwright-in-residence at the National Arts Centre. Born in Saskatchewan to an Algonquin mother and an Irish immigrant father and raised in Manitoba, Yvette lived in the Yukon and Nova Scotia before moving to Toronto, where she served as artistic director of Native Earth Performing Arts from 2003 to 2011. Her book Medicine Shows about Indigenous theatre in Canada was published in 2015. She lives in Saskatoon.

Other titles by Yvette Nolan