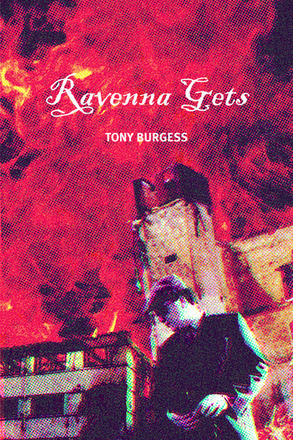 Tony Burgess has been experimenting with apocalypse fiction in numerous earlier works: the language/speech virus in 'Pontypool', the enigmatic small world in the big world of Caesarea, and other less elaborate speculations. News coverage of the fall of Baghdad and its aftermath ... Read more

Tony Burgess has been experimenting with apocalypse fiction in numerous earlier works: the language/speech virus in 'Pontypool', the enigmatic small world in the big world of Caesarea, and other less elaborate speculations. News coverage of the fall of Baghdad and its aftermath were the inspiration for 'Ravenna,' especially the smaller stories of people being killed suddenly in their homes in the middle of otherwise normal days. Each story in 'Ravenna Gets' begins as any novel might,but abruptly loses the luxury of becoming a novel through a seemingly random and violent intrusion from beyond the world established by the story. The effect is intended to be that of the experience of war as the sudden end of stories, rather than being a war story itself. This destabilizing 'pinch' seeps into the consciousness of some of the stories, not as a consciousness of events, but rather as nightmarish bends in experience and perception. 'Ravenna Gets' could probably be classified as speculative fiction, influenced by J. G. Ballard, and, though experimental in spirit, it employs strong conventional storytelling techniques. ". ..out on the edge and experimental to the point of reader-confusion, but surprisingly alluring. When taking a reader to the cliff edge, then the writing must be as enticing as chocolate even if the story smells bad. I don't get it and I didn't enjoy it, but I couldn't look away: This poetic, fast-flying nihilistic narrative of carnage is well done. " - Globe & Mail" 'Ravenna Gets', in particular, concerns itself with sudden and convulsive deaths; Christmas reading this is not. Many of the tales, which are all named after an address in Collingwood, begin like a standard short story  what Burgess calls "the lightness and the pointlessness of establishing life"  before its characters are suddenly dispatched in a variety of ghoulish ways. " - The Ottawa Citizen" 'In Ravenna Gets', Tony Burgess is up to his old, sick, satisfying tricks. Small Ontario towns are whacking each other with more gore than Hostel, more pitchforks than American Gothic. This is a pitiful excuse for literature and Tony Burgess is our only hope. " - Clint Burnham, author of 'Smoke Show' and 'Airborne Photo'

Other titles by Tony Burgess