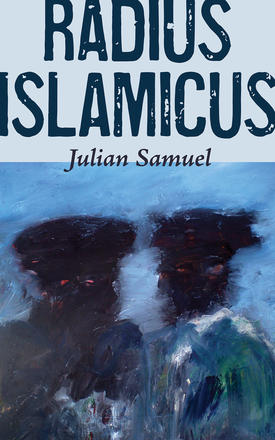 Joseph, the tactician behind the Piccadilly Circus bombing and many other such events, finds himself in a nursing home in Pierrefonds, Quebec, where he is losing his mind but regaining his conscience. In Radius Islamicus we see minds that cannot be located by drones carrying ... Read more

Joseph, the tactician behind the Piccadilly Circus bombing and many other such events, finds himself in a nursing home in Pierrefonds, Quebec, where he is losing his mind but regaining his conscience. In Radius Islamicus we see minds that cannot be located by drones carrying Hellfire missiles. These non-state actors, led by Joseph, do not live in caves. They live in Moose Jaw, Toronto, Amsterdam, London, New York and the Isle of Jura. They take vacations in Thailand, have an understanding of science, are concerned ecologists, drive solar-powered cars, and plot to blow up the Western civilization that created them.

Currently residing in Toronto after living in Montreal for three decades, Julian Samuel is a writer, documentary filmmaker, and visual artist. Publications include a novel, Passage to Lahore, and poetry, Lone Ranger in Pakistan. He has directed many documentaries including: The Raft of the Medusa: Five voices on colonies, nations and histories, Into the European Mirror, City of the Dead and the World Exhibitions, Save and Burn and Atheism.

A gang of old terrorists end up in the same retirement home in Québec. Joseph, the narrator, claims to be there to make sure they do not, in their dotage, incriminate themselves. Or are these the meandering memories of an old man? Julian Samuel has written a brilliant, disturbing and at times moving novel about terrorism.

In an age of gross inequality, economic disparity, environmental degradation and political instability the author has given us a revealing portrait of an unsavoury creature willing to sell his soul to a lost cause.

Julian Samuel’s speculative novel shocks the reader while making her laugh and cry all at once. It is irreverent, sardonic and brutal, with body parts being blown to unrecognizable pieces. Nothing is sacred anymore. There are no gods except made-up ones for terrorists. Whatever smiles are there are the smiles of the near dead. It does not matter who falls as long as the donkeys are intact. All is fair as long as there is no disclosure during the “whimper” at the end – the one last blast before the final take off.

Praise for Passage to Lahore: One of the bravest pieces of writing to emerge from our carefully confused Canada. Samuel travels from Lahore to Montreal (and many points in-between) with the ease of an accredited nomad. In the doing, he stakes out a place for smart, wicked characters equally fluent in international politics and intellectual gossip. This book is unafraid of anger, unafraid of ideas, unafraid of speaking the wrong thing. Passage to Lahore marks Samuel as an important renegade voice within postcolonial fiction. --Cameron Bailey, artistic director, TIFF