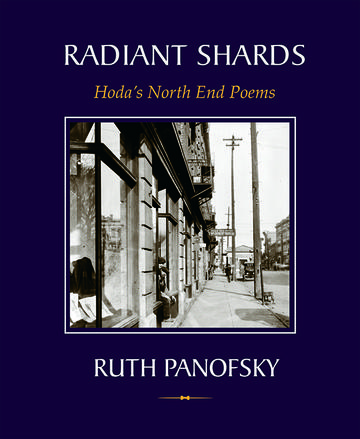 This long, narrative poem, Radiant Shards: Hoda's North End Poems, traces the sacrifice and suffering of devoted but destitute parents, Russian immigrants who are acutely affected by the Depression and struggle relentlessly to survive in Winnipeg. More importantly, with its ... Read more

This long, narrative poem, Radiant Shards: Hoda's North End Poems, traces the sacrifice and suffering of devoted but destitute parents, Russian immigrants who are acutely affected by the Depression and struggle relentlessly to survive in Winnipeg. More importantly, with its focus on the life experience and inner world of their tenacious daughter - and as the first poetic project to give voice to a Jewish sex worker, a figure that has been all but erased from literary history - Radiant Shards is a compassionate and humanizing work. The poem invokes Adele Wiseman's 1974 novel Crackpot, described by Jewish Studies scholars Ruth Wisse as a foundational twentieth-century literary text and by Josh Lambert as a radically feminist work. This book imagines the interior life of the novel's protagonist, an obese Jewish sex worker named Hoda, who services the boys and men of North End Winnipeg during the first half of the twentieth century. In Radiant Shards, Hoda reflects personally and knowingly on the experiences of her complicated life. Against the structural arc of novelistic events that shape her worldview, she plumbs the depths of her suffering and the triumph of her will from a poetically imagined position of maturity and self-awareness. This creative project also incorporates archival/historical photographs housed in the Jewish Heritage Centre of Western Canada and the Archives of Manitoba. These images ground the poet's lyric presentation of Hoda and deepen the resonant voice of a character that originally was modelled on an actual North End resident.

Ruth Panofsky is an award-winning poet who lives and writes in Toronto, where she teaches Canadian Literature and Culture at Ryerson University. She is the author of The Force of Vocation: The Literary Career of Adele Wiseman (2006) and The Literary Legacy of the Macmillan Company of Canada: Making Books and Mapping Culture (2012). Her award-winning critical edition of the collected poetry of Miriam Waddington appeared in two volumes in 2014 and, most recently, she edited The Spice Box: Canadian Jewish Writing (2017). Her newest work, Toronto Trailblazers: Women in Canadian Publishing, which focuses on key twentieth-century publishers, editors, and literary agents, was published in 2019. She is also an award-winning poet. She received the Helen and Stan Vine Canadian Jewish Book Award for Laike and Nahum: A Poem in Two Voices (2007). Radiant Shards: Hoda’s North End Poems, her third volume of verse, received a Hadassah-Brandeis Institute Research Award.

Hoda, the protagonist of Adele Wiseman's 1974 novel Crackpot, has long occupied my mind. Years ago, she leapt off the page to become a literary companion and now--as a result of my poetic engagement with Wiseman's fiction--she has made her way into this volume.

Radiant Shards would not exist but for Wiseman's creation of a fully formed character and the particular world she inhabits: the Jewish enclave of North End Winnipeg during the first half of the twentieth century. Indeed, readers who know Crackpot will recognize the figures and narrative arc of these poems, as well as the liberties taken along the way. And for those unfamiliar with the novel, Hoda resides here, brought to new life.

In Wiseman's fiction, the sex worker Hoda--she preferred the term to prostitute--is presented via a third-person narrator. In my work, she is given her own lyric voice. Occasionally, she evokes the language of Crackpot. Always, she speaks in a voice of my imagining. Alternately youthful and mature, this voice plumbs Hoda's private thoughts and tangled feelings. Sometimes, it is directed outward in response to those who would question Hoda's choices and behaviour.

Wiseman claimed to have based her heroine on an actual figure of North End Winnipeg, once home to the city's red light district. Over the course of this project, my admiration for the loving and resilient Hoda--a hybrid of the real, the fictional, and now the poetic--has only grown and deepened.
&mdashToronto, January 2019

"From Adele Wiseman's novel, Ruth Panofsky has distilled the voice of sex worker and "cracked pot" Hoda: sometimes lewd, often plangent, always recalling the shattered way we live and make sense out of (nearly) impossible histories of violence and revolutionary love. These shards of poetry find the beauty in the broken, and the monologic twist of Radiant Shards is as wry as it is tender. Accompanied by beautiful period photographs of Winnipeg's North End and powered by Panofsky's poems, Hoda speaks: neighbourhood historian, global truth-teller, radiant hostess. "
--Tanis MacDonald, author of Mobile

"Lewd, you say?" The questioning voice of Hoda from Adele Wiseman's Crackpot is at the centre of Ruth Panofsky's new collection, Radiant Shards: Hoda's North End Poems. Kosher butchers, the Prince of Wales, and North End daily life resonate anew in Panofsky's provocative re-imagining of Wiseman's Winnipeg. "
--Norman Ravvin, author of The Girl Who Stole Everything

"While created almost 50 years ago, Hoda is character who is deeply relevant in the 21st century, where sex workers, immigrants and large-sized women, continue to face discrimination. ..Hoda's story, as retold poetically by Ruth Panofsky, becomes a light-filled ode to seeing ourselves and others with clarity and forgiveness. "
&mdashWhite Wall Review

Other titles by Ruth Panofsky