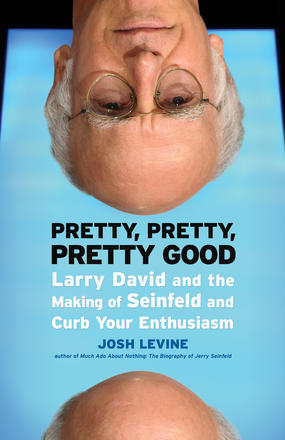 As a comedian, then producer of Seinfeld, and subsequently the creator and star of Curb Your Enthusiasm, Larry David cultivated a fanatical following. In his early stand-up days, if he walked on stage and ... Read more

As a comedian, then producer of Seinfeld, and subsequently the creator and star of Curb Your Enthusiasm, Larry David cultivated a fanatical following. In his early stand-up days, if he walked on stage and didn’t like the crowd, he would walk off. Together with Jerry Seinfeld, he pitched NBC on a sitcom where nothing happens. A whole show could be about waiting in line at a Chinese restaurant. And somehow Seinfeld became the most successful comedy show of all time.

After nine years of writing and producing Seinfeld, and after making a huge amount of money, Larry David began to create a new show for HBO. Without much separation between himself and the character he played, Curb Your Enthusiasm followed the daily routines of Larry David. Being politically correct was far from Larry’s mind, and the audience cringed as he berated, tormented, and blustered his way into the hearts of TV watchers.

Follow the early exploits of Larry’s stand-up career, his days writing for Seinfeld, and learn how Curb was conceived and developed. Pretty, Pretty, Pretty Good — titled after Larry’s key catchphrase — also explores Larry’s on- and off-screen relationships with famous pals like Richard Lewis, Ted Danson, Mary Steenburgen, and the cast of Seinfeld, and contains an in-depth episode guide to the first seven seasons of Curb Your Enthusiasm.

Josh Levine is a freelance television critic and the author of Jerry Seinfeld: Much Ado About Nothing and David E. Kelley: The Man Behind Ally McBeal.

Curb Your Enthusiasm is a show that divides people. There are those who love it, find it excruciatingly funny, and revel in its taboo-breaking humor, in the aggressive outbursts of its characters, in its depiction of social, moral, physical, and sexual humiliations. They see Larry David as a Freudian id out of control, unable to conjure up the social restraints that stop the rest of us from saying what we really think and feel. And yet they appreciate that Larry, for all his selfishness, his childlike and neurotic behavior, is a man who enjoys and even embraces life.

These fans see the show as a step up from the more conventionally framed Seinfeld, with its traditional set, three-camera shooting, punch lines, and laugh track. They consider Curb a far less comfortable show: darker, edgier, and more honest. They appreciate its use of improvisation and handheld camera work, the result of which is rougher and gives a more “real” feel to the show, despite the often-complicated plotlines. They appreciate its fearless examination of cultural attitudes to religion, race, physical disabilities, and sex — in a manner that, while highly politically incorrect, is in no way conservative or right-wing. They see it as just as funny as Seinfeld but in a more painful way.

And then there are those who can’t stand Curb Your Enthusiasm, who have tried to watch it and find themselves unable to sit through its excruciating social embarrassments, its scenes of characters almost apoplectic with rage, saying things that should never be said, and its relentless references to sex acts, sex parts, rashes, bruises, injuries, urination, and defecation. What, they say, is enjoyable about any of that?

What’s amazing is that the descriptions given by both sides are totally accurate. The show is all these things. And it is these things because of one man and his skewed, dark, hilarious, distressingly honest revelations of human behavior. Larry David.

As the co-creator of Seinfeld and the author of nearly sixty of its scripts, Larry David was already one of the most successful television creator/writers of all time before Curb Your Enthusiasm. His wealth has been estimated at somewhere in the vicinity of $300 million and even as you read this it is growing rapidly from Seinfeld’s syndication rights. Now, as the creator, writer, and star of Curb Your Enthusiasm— a show with a large, cultlike following compared with the blockbuster Seinfeld— he has become one of the most innovative artists of the small screen.

When someone is rich and famous it seems to the world to have been inevitable. But with Larry David, success was no sure thing. In his early forties, he was a little-known, modestly successful comic, receiving muted responses from audiences and low pay for his gigs. He had a crummy apartment and sometimes made barely enough money for food. He had tried some television writing, making money for short periods, but had made no impression on the shows he worked for. He was frustrated and even angry, not only by the lack of success but by the lack of understanding and interest from the comedy-club audiences. In fact, he didn’t like the audience much, which may be why they, in turn, didn’t like him.

Larry David looked, in fact, like he was headed for failure. But even so, he refused to compromise, to change his act or his comic approach in order to pander to an audience that he considered to have grown soft and complacent from watching Tonight Show–style comics. He had a fresh, unusual view, not always a pleasant one, and though he was no intellectual (he didn’t much like reading books) he had insights into ordinary, seemingly trivial aspects of human behavior that others had missed.

These innovations did not come from nowhere. They were rooted in his Brooklyn Jewish middle-class upbringing. They were rooted most particularly in Jewish comedy, a humor descended from the Jewish tummler, the comic figure who would joke and ridicule and tease guests at traditional Jewish weddings back in the shtetls of Europe. It was a humor that found its way into American vaudeville and then into the mouths of the great Jewish comedians of the past (Groucho Marx, Jack Benny, Shelley Berman, Don Rickles, Lenny Bruce, Woody Allen), a dark comedy of cynicism, complaint, aggravation, aggression, humiliation, neediness, and restless energy — an insider kind of humor that by some miracle became popular with the larger American audience.

When his mother would phone Larry to ask how he was doing, Larry wouldn’t want to tell her the truth. “Pretty, pretty, pretty good,” he would say, each “pretty” qualifying the one before. It is very possible that Larry David could have continued to travel the small New York comedy-club circuit, scraping by, becoming ever more disgusted and bitter. Or he might have finally quit, to take on the kind of low-level job that he had worked in after college. But another comedian, an infinitely more successful one, as much a professional colleague as a friend, asked Larry for help. A television network had asked him to develop a show, and the comic, Jerry Seinfeld, had a hunch that Larry might be able to help him.

It was a good hunch.

Other titles by Josh Levine