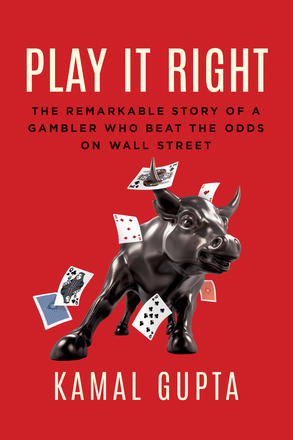 All around the world, the words “Wall Street” conjure up a powerful image. For some, it is the center of America’s capitalist system and the engine ... Read more

All around the world, the words “Wall Street” conjure up a powerful image. For some, it is the center of America’s capitalist system and the engine of its economic growth. For others, it is the home of rapacious bankers and reckless traders whose greed would lead to a global financial crisis. For an Indian-born blackjack player, Wall Street represented something else entirely — a chance for him to play in the largest casino in the world.

Kamal Gupta’s improbable journey, from a wide-eyed Indian immigrant to an ultimate insider in the rarefied world of investment banks and hedge funds, is a uniquely American story. Nowhere else would it have been possible for a scrawny computer scientist to enter the world of high finance solely on the basis of his gambling abilities. After spending seven years creating an investment methodology, Gupta went on an incredible run, generating an unprecedented 103 consecutive months of positive returns while managing money at large hedge funds. His success did not go unnoticed, and he found himself under constant pressure to take bigger risks to make even more money. He refused and always played it right, knowing that there was such a thing as “enough” money, something very few, if any, of his Wall Street peers understood.

Much like Maria Konnikova’s bestseller, The Biggest Bluff, Play It Right isn’t so much about money as it is about the human condition and beating the odds, whether at a casino, on Wall Street, or in life itself.

Kamal Gupta earned an undergraduate degree in electrical engineering from the Indian Institute of Technology in New Delhi — entering the elite institution after only completing eleventh grade — and received a master’s in computer science from the University of Wisconsin-Madison in just 11 months. Bored in the tech world, he turned himself into a professional blackjack player. An unexpected turn of events brought him to Wall Street, where for over two decades he beat the odds in every imaginable way. Gupta lives in the greater New York City area with his family.

Inside was a one-page letter addressed to me. It began, “We are pleased to offer you a position as a Junior Trader at Lehman Brothers …” and ended with Michael Gelband’s signature.

I sat there in disbelief, clutching the letter, reading that line over and over again. Against the advice of my family and friends, I had given up on a career in computers and devoted two years of my life to blackjack. It had been a struggle, but I had beaten the casinos and grown my bankroll to thirty-two times its original size. And now, I had thrown a Hail Mary to the biggest casino of them all, Wall Street, and scored a job offer on the spot.

I had made the journey from San Francisco to New York for this interview on a whim, figuring that I was wasting my frequent-flyer ticket on a foolish pursuit. Lehman had insisted that I pay for my own flights because you don’t seem serious about this business, an obvious fact that was hard for me to argue against. After an initial reluctance, I had decided to take a chance and used my airline miles for the trip. The gamble had paid off more handsomely than I could ever have imagined.

Now that I had an actual job offer, I wasn’t quite sure what to do with it. Michael expected a yes right there and then. However, sitting in that office, I wasn’t prepared to uproot myself from a city that I adored and relocate to one that terrified me.

I cleared my throat and said, “I need to think about it. I’ll let you know in two weeks. ”

Michael looked flummoxed, the smile evaporating, “Two weeks? Are you out of your mind? Do you have any idea what we’re offering you? Look around, half the people on this trading floor get paid more than most CEOs. Do you know how hard it is to get your foot in this door? There is a long line of Ivy League graduates standing outside that would kill for this opportunity. ”

I didn’t know and I almost didn’t believe any of it. Never in my wildest dreams did I expect to land a Wall Street job so quickly. An initial rush of euphoria was quickly followed by a growing sense of dread. What had I gotten myself into?

I refused to budge and insisted that I needed time to make such a big decision. In the end, Michael relented and gave me the two weeks that I had asked for. The next day, I flew back to San Francisco to ponder the biggest gamble of my life.

Without knowing the first thing about finance, was I willing to take a chance on Wall Street?

“Kamal Gupta’s Play It Right proves once again that life writes the best stories in this highly entertaining and humorous memoir that offers a peek behind the scenes of Wall Street. ” — 24Symbols

“Mr. Gupta is a raconteur par excellence. His autobiographical account could give any good work of fiction a run for its money. Those keen on blackjack and bond trading may even pick up a handy trick or two and have a jolly good time devouring this utterly enjoyable read. ”— The Business Standard 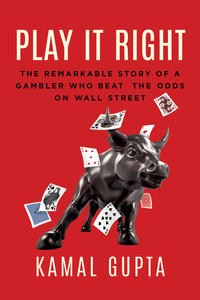