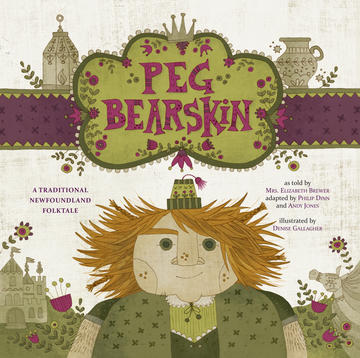 Peg's big, ugly, and hairy, yes, but she's also smart enough and brave enough to outsmart a witch, help a king, and find husbands for her two beautiful sisters and for herself. This brilliant re-take on a classic folktale from Placentia Bay, Newfoundland will have readers of ... Read more

Peg's big, ugly, and hairy, yes, but she's also smart enough and brave enough to outsmart a witch, help a king, and find husbands for her two beautiful sisters and for herself. This brilliant re-take on a classic folktale from Placentia Bay, Newfoundland will have readers of all ages cheering for Peg. And falling for her too! The story is now available in this bright and beautiful new edition. Maintaining Dinn and Jones's original adapted text, with all of its playful wit and delightful musicality, this new book features all new illustrations by Louisiana-based Denise Gallagher. Their fun, folksy flavour breathes new life into the story, and reminds us that Peg is a heroine for all places and all times. The book includes an afterword with information about the folktale's history.

An actor, writer, storyteller, and director, Andy Jones was born and raised in St. John's, NL, where he continues to live and work. Once a member of the acclaimed NL comedy troupe CODCO, he has had a long and accomplished career in theatre, film, and television. He is the co-adaptor of award-winning folktale Peg Bearskin, and the author of an acclaimed series of Jack tales (illustrated by Darka Erdelji). In 2019 he was named to the Order of Canada in recognition of his contributions to the culture of Newfoundland and Labrador.

Musician, actor, storyteller, and writer, Philip Dinn was a founding member of Figgy Duff, Newfoundland's acclaimed folk rock band. He appeared in many television shows and feature-length films, and countless plays. For years, he divided his time between Newfoundland and Nova Scotia, where he continued his work with traditional Newfoundland stories. He was one of the co-adapters ofPeg Bearskin. Philip passed away in November of 2013.

Louisianan artist, illustrator, and graphic designer, Denise Gallagher creates artwork full of whimsy, wit, and heart. In it, she fuses the influence of the Cajun and Creole cultures that surround her. Her work has been recognized by many organizations, including the American Advertising Federation, Print Magazine, the Society of Illustrators-Los Angeles, and the Society of Illustrators-New York. She lives and works in Lafayette, LA.

Other titles by Andy Jones