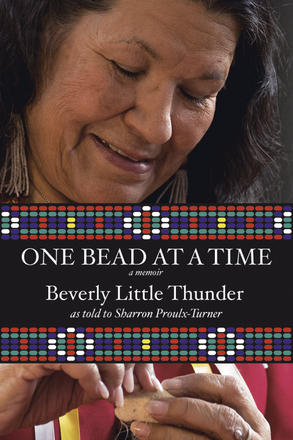 One Bead at a Time

One Bead at a Time

One Bead at a Timeis the oral memoir of Beverly Little Thunder, a two-spirit Lakota Elder from Standing Rock, who has lived most of her life in service to Indigenous and non-Indigenous women in vast areas of both the United States and Canada. Transcribed and edited by two-spirit ... Read more

One Bead at a Timeis the oral memoir of Beverly Little Thunder, a two-spirit Lakota Elder from Standing Rock, who has lived most of her life in service to Indigenous and non-Indigenous women in vast areas of both the United States and Canada. Transcribed and edited by two-spirit Métis writer Sharron Proulx-Turner, Little Thunder's narrative is told verbatim, her melodious voice and keen sense of humour almost audible overtop of the text on the page. Early in her story, Little Thunder recounts a dream from her early adulthood, "I stared at these lily pads for the longest time and I decided that there was one part of the pond that had lots of lily pads and no frogs. I said, 'I want to go there because there's lots of lily pads but no frogs and I like creating community. '" And create community she does. Little Thunder established the first and today, the only all-women's Sundance in the world, securing a land base in the Green Mountains of Vermont for future generations of Indigenous women's ceremony. She was active in the A. I.M. movement and she continues to practice and promote political and spiritual awareness for Indigenous women around the world. A truly remarkable visionary.

Sharron Proulx-Turner is a member of the Métis Nation of Alberta. Originally from the Ottawa river valley, Sharron is from Algonquin, Ojibwe, Mohawk, Wyandat, Mi'kmaw, French and Irish ancestry. She's a two-spirit nokomis, mom, writer and community worker. Where the Rivers Join (1995), a memoir (Beckylane), was a finalist for the Edna Staebler Award for creative non-fiction, and what the auntys say (2002), was a finalist for the Gerald Lampert Prize for poetry. Sharron's work appears in several anthologies, including Oxford Anthology of Canadian Native Literature in English, Crisp Blue Edges, Tales from Moccasin Avenue, Double Lives: Writing and Motherhood, and in literary journals, including Gatherings, Yellow Medicine Review and West Coast Line. Sharron has two more recent books, a mixed-genre-historical-fiction called, she walks for days/ inside a thousand eyes/ a two-spirit story (2008), and a book of dedication poems called, she is reading her blanket with her hands (2008). She is currently transcribing the recorded lifestory of Lakota Elder Beverly Little Thunder, who, together with her daughter Lushanya Echeverria, leads the only all-women's Sundance on Turtle Island. The trees are still bending south is Sharron's fifth book.

One Bead at a Time is a timely testimonial of the indomitable character and expansive vision necessary to break deeply set patterns of intergenerational intersectional oppression in one's personal and communal life. The capacity to transform tragedy into possibility, sadness into joy, and social exclusion into an invitation for belonging is perhaps the most powerful tool humanity has at its disposal during these critical times. Let this groundbreaking contribution inspire all of us to work together to reconstitute the circle of life. "
--Sayra Pinto, author of Vatolandia and Pinol: Poems

"Beverly Little Thunder is a dedicated visionary who holds and shares ancient wisdom for modern times. She has chosen the path of 'earth' teaching all those who are blessed to meet her on her path how to respect All of the Relations on our planet and beyond. All these teachings held in a womb of nonhierarchy connecting the dots to unity consciousness. ..as she continues to cast her seeds across this Turtle Continent, each of us treads more lightly on our Mother Earth, one step at a time . .. each of us a part of the eternal sacred hoop of life. "
--Rev. Ann Benedetto, Pastor, Interfaith Ministries

"We have a prophecy in our territories that states: 'The tender time will come when our Indigenous women will take back their rightful leadership roles in our societies all across our nations. Until that time our Earth Mother and all beings upon her will be out of balance. ' Beverly Little Thunder, our relative, sister, daughter, lives the essence of this inherent traditional role as she unapologetically has shifted the balance to its original state by resurrecting our self-determined self governed ways of Indigenous Matriarchal Clan Mothers values. Those very values that the world so desperately needs in these trying times. Solidly rooted in her Indigenous values, guided by Grandmother's Wisdom, she has shifted the balance of our Earth Mother and the thousands upon thousands of women she has graciously shared her Indigenous knowledge with. You, Beverly, have made a major contribution to all Indigenous women on this Earth Mother of ours. You have given them the desire to move forward in what we all know needs to be done in this old colonial world of ours. Praises and Congratulations to you on this important life-giving book. "
--Elder Mae Louise Campbell; Ishkote Odeima Ikwe, Daughter Jamie; Mushkeeki Ikwe Bimose Ojibwe-Saulteaux Nation, Clan Mothers Turtle Lodge Healing and Educational Village , Winnipeg, Manitoba, Canada 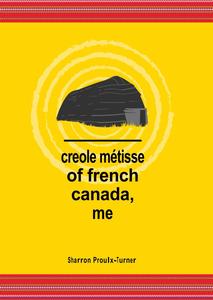 After a near-20 year writing and editing relationship and friendship, Sharron Proulx-Turner's editor Aruna Srivastava fields questions about her late friend's final collection, the hybrid of storytelling and poetry  creole métisse of french canada, me (Kegedonce Press). ... Read more

Other titles by Sharron Proulx-Turner