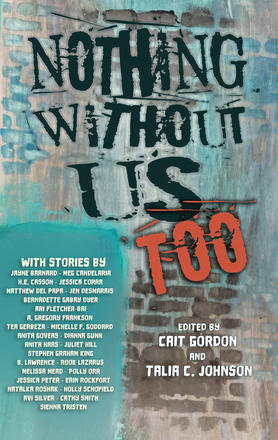 Nothing Without Us Too

Nothing Without Us Too

Nothing Without Us Too follows the theme of Nothing Without Us (a 2020 Prix Aurora Award finalist), featuring more stories by authors who are disabled, d/Deaf or hard-of-hearing, Blind or visually impaired, neurodivergent, Spoonie, and/or who manage mental illness. The lived ... Read more

Nothing Without Us Too follows the theme of Nothing Without Us (a 2020 Prix Aurora Award finalist), featuring more stories by authors who are disabled, d/Deaf or hard-of-hearing, Blind or visually impaired, neurodivergent, Spoonie, and/or who manage mental illness. The lived experiences of their protagonists are found across many demographics--such as race, culture, financial status, religion, gender, age, and/or sexual orientation. We want to present these stories because diversity is reality, and it belongs in literary and genre fiction.

So, whether we're being welcomed to Sensory Hell by hotel staff, witnessing a stare-down between a convenience store worker and an arrogant vampire, or unsure if our social media account is magic, these tales can teleport us elsewhere yet resonate deep within.

Cait Gordon is an autistic, disabled, and queer Canadian writer of humorous speculative fiction that celebrates diversity. She is the author of Life in the 'Cosm, The Stealth Lovers, and Iris and the Crew Tear Through Space (2023). Her short stories appear in Alice Unbound: Beyond Wonderland, We Shall Be Monsters, Space Opera Libretti, and Stargazers: Microtales from the Cosmos. Cait also founded The Spoonie Authors Network and joined Talia C. Johnson to co-edit the Nothing Without Us anthology, a 2020 Prix Aurora Award finalist, whose authors and protagonists are disabled, d/Deaf, neurodivergent, Spoonie, and/or they manage chronic illness, and/or mental illness. She reunited with Talia to co-edit Nothing Without Us Too.

Kohenet Talia C. Johnson is a multi-faceted woman who is transgender, autistic, Jewish, queer, and more than the sum of her parts. She was ordained a Kohenet Priestess in August 2019, the first transgender woman in the program. Her work centres on bridging faith and queer communities, facilitating workshops, educating, speaking, writing, one-on-one coaching, counselling, and mentoring. Talia has worked as a sensitivity editor for queer and trans representation, and her poem, Holy Love, appears in the Resilience anthology (Heartspark Press). She also sits on the executive of A4A Ontario, an autistic-led self-advocacy group. Talia joined Cait Gordon to co-edit Nothing Without Us and Nothing Without Us Too.

A funny thing happened on the way to the last anthology. ..

People were asking when we planned to publish another one, just before Nothing Without Us was released. At that time, we were both exhausted from nine months of intensive work on that project, and our first thoughts were, "Can we haz a rest?"

But the notion never left our minds. Neither of us expected what was going to happen after Nothing Without Us went out into the world. First, we got a message from a billionty-times Prix Aurora Award winner and academic Derek Newman-Stille that they would include the anthology as part of their syllabus in a disabilities studies course they'd teach at Trent University. We were gobsmacked. Then in spring of 2020, Nothing Without Us was nominated for a Prix Aurora Award in the Best Related Work category. We might have made Scooby-Doo inquiry sounds at that; we can't recall.

And so, in early 2020, our pitch was accepted by Renaissance for a second anthology, to be released in 2022. This is the part, where looking back, we don't know whether to laugh or cry. The pandemic. The constant barrage of eugenics-based messages about how folks like us who are disabled or immunocompromised. .. only our lives were in danger. It had been made abundantly clear to many of us that we didn't matter to a whole lot of people. It wasn't new thinking, but it had gone next level. In the middle of this hellscape, should we have even thought about doing another anthology?

That would be yes. We felt more than ever it was important to boost the works of the creatives in our community.

And this time, we wanted to showcase authors who were not in the last collection. The point of these anthologies is to boost the works of authors who are disabled, d/Deaf or hard-of-hearing, Blind or visually impaired, neurodivergent, Spoonie, and/or who manage mental illness. One of the best things about these projects is discovering authors we might not have previously read!

We chose the word TOO in the title instead of the number two because it's such a mood right now. Kind of like, "Hey, remember us? Nothing without us, too, folks!" We also wanted to include representation that wasn't in the first anthology because these folks are part of our community as well. We feel both anthologies together offer many points of view and lived experiences, so for us, they are a set, a combined collection, if you will.

We hope you get as much out of Nothing Without Us Too as we did. We thank everyone who submitted to us, because creating art at a time like this is an act of resilience, advocacy, and resistance. We get it. We really do. 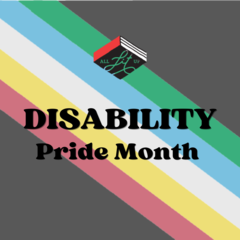