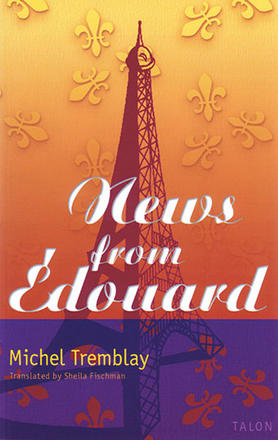 Édouard, whom we met in The Duchess and the Commoner, a common shoe salesman at the feet of the well-heeled by day; but the “Duchess of Langeais,” star of the transvestite shows on the Main by night, has been left an inheritance by his mother, Victoire. With this money, ... Read more

Édouard, whom we met in The Duchess and the Commoner, a common shoe salesman at the feet of the well-heeled by day; but the “Duchess of Langeais,” star of the transvestite shows on the Main by night, has been left an inheritance by his mother, Victoire. With this money, he sails on the ocean-liner Liberté to Paris, an idealized, glorious foreign place, the art, culture and architecture of which he imagines will be familiar to him from the books and movies he has read and seen. But when he arrives in Paris, his constant encounters with the realities of the primitive and inconvenient aspects of daily life in Europe bring him face to face with the recognition that France is not exclusively the liberating, glorious place he had imagined it to be. The divine Paris, it turns out, does indeed have feet of clay. All of this he records in a diary, which he will send to his sister-in-law, “the fat woman. ” Will Édouard survive the disillusionment of both his journey to the imperial centre, and his return to what he previously considered the dull and dreary reality of his life in Montréal?

While all of the six novels in this series recount the moving, hilarious, angry and exotic lives of the generation inhabiting the “Plateau” of Montréal just on the cusp of Québec’s metamorphosis from the oppression of colonialism to a culture with its own identity and language, News from Édouard, volume four in this six-part series of semi-autobiographical novels, is the most pointedly explicit at the level of Tremblay’s sweeping metaphor of Québec’s search for identity, dignity, pride and independence from both its French and its British (Canadian) colonial past.

“Michel Tremblay’s long labour of love…is a lasting study of and tribute to his own working-class origins that should stand in time as a literary landmark. ”
— Toronto Star