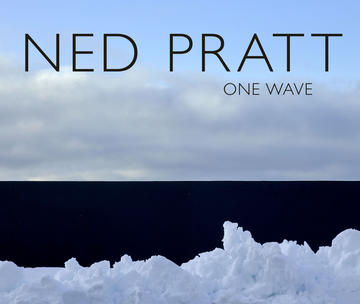 The world in bold; Newfoundland in abstract.

With Ned Pratt, there is no nostalgia, no romance, no theatre. His interest in the Newfoundland landscape forms the foundation for his ... Read more

The world in bold; Newfoundland in abstract.

With Ned Pratt, there is no nostalgia, no romance, no theatre. His interest in the Newfoundland landscape forms the foundation for his photography.

Pratt's approach to the act of looking transcends place. He distills the landscape into abstractions of form and colour. Disrupting depth with close architectural details and incisions of poles and wires, he undermines the traditional, romantic notion of “looking out” to sublime geometry.

Ned Pratt: One Wave charts a decade of Pratt's breathtaking photography. Echoing Pratt's aesthetic, this beautifully designed book presents Pratt's works in formal conversation with each other. Stark imagery of buildings is juxtaposed with forays into abstraction and celebrations of the inherent geometry of natural forms — whether a single wave crashing over a wall or stones cracked by freezing and thawing.

Mireille Eagan is curator of contemporary art at The Rooms Provincial Art Gallery, St. John's. Prior to this, she was curator at the Confederation Centre Art Gallery in Charlottetown, Prince Edward Island. Eagan has lectured nationally on Canadian art and has published several catalogues and essays on Canadian artists. She has a special interest in promoting the activities of artists based in the Atlantic provinces.

Sarah Fillmore is Chief Curator and Deputy Director of Programming at the Art Gallery of Nova Scotia.

Ray Cronin is a writer and curator based in Nova Scotia. He is the former Director of the Art Gallery of Nova Scotia, the founding curator of the Sobey Art Award, and a frequent contributor to Canadian and American art magazines.

Jonathan Shaughnessy is Associate Curator, Contemporary Art at the National Gallery of Canada.

"Pratt embraces this harsh land, celebrates it, in all its glorious starkness. His sharp, in-your-face angles crash hard, whether he’s giving us a glimpse of ocean from a ferry, a wave crashing over a breaker, a snowdrift, a red-striped trailer or a guardrail by the roadside, fog on rocks, a frozen slab of seawater or a lone shack shelter in a storm of white. "

Other titles by Mireille Eagan

Other titles by Sarah Fillmore

Other titles by Ray Cronin