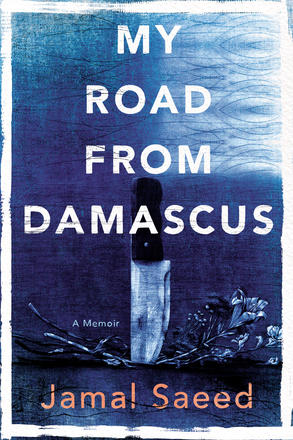 My Road from Damascus

My Road from Damascus

An extraordinary account of survival in Syria’s most notorious military prisons that is written with “brutal clarity — and yet, there is a poetic quality to the ... Read more

An extraordinary account of survival in Syria’s most notorious military prisons that is written with “brutal clarity — and yet, there is a poetic quality to the telling. ” — Frances Itani, award-winning author of Deafening and Remembering the Bones

Jamal Saeed arrived as a refugee in Canada in 2016. In his native Syria, as a young man, his writing pushed both social and political norms. For this reason, as well as his opposition to the regimes of the al-Assads, he was imprisoned on three occasions for a total of 12 years. In each instance, he was held without formal charge and without judicial process.

My Road from Damascus not only tells the story of Saeed’s severe years in Syria’s most notorious military prisons but also his life during the country’s dramatic changes. Saeed chronicles modern Syria from the 1950s right up to his escape to Canada in 2016, recounting its descent from a country of potential to a pawn of cynical and corrupt powers. He paints a picture of village life, his youthful love affairs, his rebellion as a young Marxist, and his evolution into a free thinker, living in hiding as a teenager for 30 months while being hunted by the secret police. He recalls his brutal prison years, his final release, and his family’s harrowing escape to Canada.

While many prison memoirs focus on the cruelty of incarceration, My Road from Damascus offers a tapestry of Saeed’s whole life. It looks squarely at brutality but also at beauty and poetry, hope and love.

Waiting to be executed, I remember as clearly as if I could see them, many of the other people I’d known in different Syrian towns: children, men, and women, old and young; relatives, friends, and those who’d shared in the painful experiences of prison; interrogators out of control in the interrogation branch in Latakia; doomsday in cellblock seven in the military’s special investigation branch in Damascus; prisoners of conscience, murderers, thieves, drug dealers, cats, rats, and police in al-Qala’a prison; bodies exhausted by fear, faces distorted by terror, souls brutalized by humiliation in Tadmur prison. The faces of women I’d loved and cried over when they left, and those of the ones who loved me and who cried when I left. Informers for the intelligence services who visited me diligently after my release on the pretext of asking after my health. A great gathering of people, birds, beasts, with their features crystal clear; springs, rivers, different places by the sea, rough tracks, paved roads, and even familiar rocky outcrops. I am completely absorbed by this throng of images, smells, and the sounds my memory yields, sharper and more delicate than I would have believed possible, and in that moment I really forget where I am. I don’t think about how my brazen answers to the officer had just slammed the door on my future.

I am devouring life avidly as if it only existed in the past when the door of the interrogation room opens and footsteps approach. I brace myself for the end, but nothing. If only I could move my hand, I would pull the blindfold away from my eyes. Has the soldier who entered the room changed his mind and left again? Or is he standing close to me this very second? I picture the room full of instruments of torture: an old tire, electric cables, clubs, a German chair, water, and a packet of pins on the metal table where the interrogator usually sat. Big strong torturers no more than twenty-five years old will show up at any moment…

The door opens again and I hear the sound of something being moved on a metal table. The door shuts again. Have they taken something out of the room? The sound of footsteps in the corridor. People hurrying, and then the sound of shouting. The desperate voice of a man begging his torturers to stop beating him, a wailing sound in which pain, hope, and impotence mingle. I know that wailing well. I’d heard it many times, sometimes coming out of my own mouth.

“Jamal writes with brutal clarity — and yet, there is a poetic quality to the telling. He manages to hold in balance the idyllic memories of growing up in a land he loves, alongside his experiences inside Syrian prisons, where he peels back the dark walls and allows us to witness and pay heed to the unthinkable. ” — Frances Itani

“This memoir tells not only of his time in Syria’s most brutal military prisons but of village life, youth, love, poetry, and a country and society warped from its potential. ” — Quill & Quire