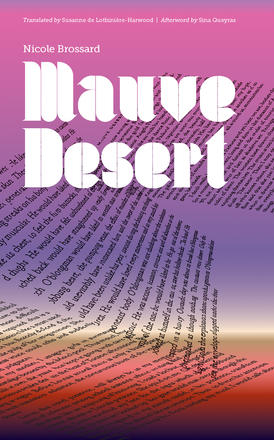 First published in 1987, Nicole Brossard's classic novel returns to Coach House in a new edition. A seminal text in Canadian and feminist literature, Mauve Desert is a must-read for readers and writers alike.

This is both a single novel and three separate novels in one. In the ... Read more

First published in 1987, Nicole Brossard's classic novel returns to Coach House in a new edition. A seminal text in Canadian and feminist literature, Mauve Desert is a must-read for readers and writers alike.

This is both a single novel and three separate novels in one. In the first, Mauve Desert, fifteen-year-old Mélanie drives across the Arizona desert in a white Meteor chasing fear and desire, cutting loose from her mother and her mother's lover, Lorna, in their roadside Mauve Motel. In the second book, Maudes Laures reads Mauve Desert, becomes obsessed with it, and embarks on an extraordinary quest for its mysterious author, characters and meaning. The third book - Mauve, the horizon - is Laures's eventual translation of Mauve Desert. Like all good translations, it is both the same and revealingly different from the original.

'With the appearance of Mauve Desert ... Nicole Brossard reinforces her claim to be ranked among the few truly radical text-makers in North America.' - The Toronto Star

'In Mauve Desert, Nicole Brossard writes from the point of impact; from the collision between languages, between forms and ideas, between cultures and genders. Her effects too are the effects of collisions: brilliant sparks and white hot fragments, alarm and the possibility of danger, and a momentary light in which we glimpse the bizarrely distorted faces of strangers, which turn out after all to have been our own.' - Margaret Atwood