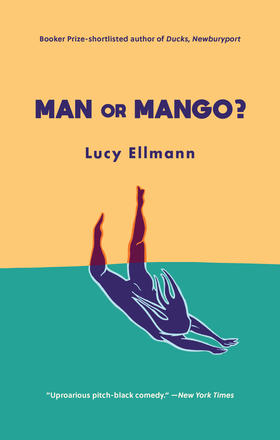 By the Booker-shortlisted author of Ducks, Newburyport, a formally madcap and prescient novel about men (and women), mangos (and bees), and modern love.

Reclusive Eloïse lives with her cats and her cello in an English country cottage, privately building a case against men, ... Read more

By the Booker-shortlisted author of Ducks, Newburyport, a formally madcap and prescient novel about men (and women), mangos (and bees), and modern love.

Reclusive Eloïse lives with her cats and her cello in an English country cottage, privately building a case against men, women, the Queen, Nazi list-makers, fluorescent lighting, her ex-flatmate Howard, nuclear bombs, and toilet-roll-holder manufacturers. She has a real thing about giant pumpkin growers too. George is an American poet, recently arrived in the UK. Struggling to finish an epic poem on ice hockey, he plays a lot of pinball and gets chased around by his students. Lost, lonely, and in love, he and Eloïse really should be together, yet it seems they may never meet up. ..

But Man or Mango? is more than a lament for unrequited transatlantic romance. Funny and furious, it is a scathing, searing, rollicking and vertiginous reflection on life and love in a belligerent world.

Lucy Ellmann was born in Illinois and now lives in Scotland. Her first novel, Sweet Desserts, won the Guardian Fiction Prize. Her latest, Ducks, Newburyport (Biblioasis, 2019), won the Goldsmith Prize in and the James Tait Black Prize for Fiction. Man or Mango?, first published in 1998 (Farrar, Straus & Giroux), was longlisted for the UK’s Orange Prize. She likes dogs and swimming, but she does not have a dog, nor does she swim.

Praise for Man or Mango?

"Prickly, strange and wholly ridiculous, the characters of Man or Mango? are delightful and so are their strange, overlapping journeys. People who enjoy mysterious, character-driven, plotless fiction will be at home in this novel, a lovely taste of what Ellmann can do. "
—Miramichi Reader

“This book has its face pressed up against the pane of the present; its form mimics the way our minds move now toggling between tabs, between the needs of small children and aging parents, between news of ecological collapse and school shootings while somehow remembering to pay taxes and fold the laundry. ”
—Parul Sehgal, New York Times

“Ellmann captures the pathos of the everyday, how one might use pie crusts and film synopses to dam in pain … The time and care that she lavishes on her narrator seem like their own form of political speculation—that every individual is owed an unending devotion, and that such devotion, applied universally, might change the fate of the world. ”
—New Yorker

“A sublime literary enactment of how guilt, grief, rage, regret, compassion, and every other emotion swirls and ebbs in unbalanced defiance of rational logic … If art is measured by how skillfully it holds a mirror up to society, then Ellmann has surely written the most important novel of this era. ”
—The Paris Review

Other titles by Lucy Ellmann