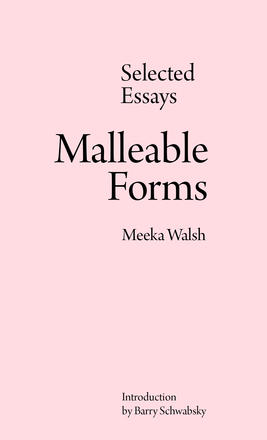 "Walsh's writings are stunning examples of how to look, how to feel, how to see. "

For 30 years Meeka Walsh has been the Editor of the Canadian art magazine, Border Crossings A selection of her much-admired essays published in each issue of that magazine have been selected for ... Read more

"Walsh's writings are stunning examples of how to look, how to feel, how to see. "

For 30 years Meeka Walsh has been the Editor of the Canadian art magazine, Border Crossings A selection of her much-admired essays published in each issue of that magazine have been selected for this substantial book.

Noted international critic and art writer, Barry Schwabsky, has written an introductory essay. The persistent engagement of memory winds through the book and resonant is EM Forster?s dictum, "Only connect. " Walsh makes her particular kind of connections throughout.

"With this collection of forty-seven pieces on literature, painting, photography, music, and a multitude of other fascinations, hauntings, and obsessions, Meeka Walsh stakes out a position as one of today's most omnivorous and original lyric-essayists. Her restless polymathic mind leaps from one artist and discipline to another in always-unlikely permutations of inquiry and engagement. Her curiosity operates within a complicated architecture of deeply felt personal experience, while her vivid inhabitation of myths built-in her earliest childhood explains her relationship to the world and art. Her work is airborne, bearing aloft Robert Frank, Walter Benjamin, Fleur Jaeggy, Clarice Lispector, Rilke, and Caravaggio on flights that never fail to nail their landings. Walsh's departed parents and grandparents and her beloved ghosts of the diaspora are never far from her thoughts. She bounces her reactions off those who came before, off the people and places who made her. In line after line, page after page, piece after piece, she makes us realize we are all writing our own artful autobiographies. She is a writer in mad, mad love with art. I love this book!" ? Guy Maddin

"Although all of the pieces in Malleable Forms circle around books, movies, pieces of music, and works of art, Meeka Walsh strikes me less as a critic than as an ideal reader of things. It?s a quality she shares with some of the philosopher-artists whose works haunt this book, who she returns to over and over again. As a "reader," Walsh makes the most astonishing connections between contemporary art, the 20th-century modernist canon, and the small and incredibly rich daily things she observes. Although she travels a lot, her writings are beautifully grounded in her experience as a life-long resident of provincial and landlocked icy Winnipeg. Through her eyes, the Canadian prairie comes into breathtaking focus. Stories of exile, Judaism, immigration, and forgotten injustices wrought throughout Canadian history are never far away. Collapsing the boundaries between "criticism" and "the personal essay," Walsh?s writings are stunning examples of how to look, how to feel, how to see. " ? Chris Kraus

Meeka Walsh is the editor of Border Crossings, an award-winning international art magazine. She has contributed essays to a number of catalogues published in Canada and the United States. Her books include Ordinary Magic, a travel memoir and The Garden of Earthly Intimacies, a collection of short stories. Ms Walsh has also edited Don Reichert: A Life in Work, and The Body, Its Lesson and Camouflage: The Photographs of Diana Thorneycroft. In 2003 she was awarded the Lifetime Achievement Award by the Western Magazine Awards Foundation and in 2007 she received a medal from the RCA for her contribution to visual art in Canada.

Other titles by Meeka Walsh