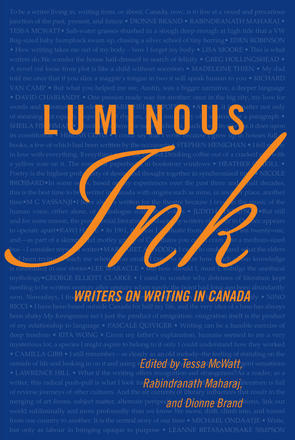 Twenty-six writers in Canada were asked to contribute pieces of original work describing how they see writing today. From Atwood’s opening, through writing from Indigenous writers, the reader is given a sense of how twenty-seven of the country’s finest writers see their ... Read more

Twenty-six writers in Canada were asked to contribute pieces of original work describing how they see writing today. From Atwood’s opening, through writing from Indigenous writers, the reader is given a sense of how twenty-seven of the country’s finest writers see their world today. With an introduction by the editors, Dionne Brand, Rabindranath Maharaj, and Tessa McWatt.
Contributors include:

Tessa McWatt was born in Georgetown, Guyana, and grew up in Toronto. She currently lives in London, England, where she is working as a producer and scriptwriter.

Dionne Brand is a poet and author; her collection of poetry, Land to Light On, won both the GG and the Trillium Book Award. Her novel, What We All Long for, won the Toronto Book Award; and her collection Ossuaries, won the Griffin Poetry Prize. She lives in Toronto.

Lee Maracle was the author of a number of critically acclaimed works, including Ravensong; Bobbi Lee, Indian Rebel; Daughters Are Forever; Celia';s Song; I Am Woman; First Wives Club; Talking to the Diaspora, Memory Serves: Oratories; and My Conversations with Canadians, which was a finalist for the 2018 Toronto Book Award and the First Nation Communities READ Award. Hope Matters, a poetry collection co-authored with her daughters Columpa Bobb and Tania Carter, was published in 2019. Maracle was also the co-editor of My Home as I Remember and served as Distinguished Visiting Scholar at the University of Toronto, the University of Waterloo, and the University of Western Washington. Maracle received the J.T. Stewart Award, the Premier's Award for Excellence in the Arts, the Blue Metropolis Festival First Peoples Prize, the Harbourfront Festival Prize, and the Anne Green Award. Maracle received an Honorary Doctor of Letters from St. Thomas University, was a recipient of the Queen's Diamond Jubilee Medal, and was an Officer of the Order of Canada. In July 2019, she was announced as a finalist of the prestigious Neustadt Prize, popularly known as the American Nobel. A member of the Sto:lo Nation, Maracle passed away on November 11, 2021, in Surrey, British Columbia. She was 71.

Lisa Moore is the author of Degrees of Nakedness, Open, Alligator, February, Caught, Something for Everyone, and the young adult novel Flannery. She lives in St. John's, where she teaches creative writing at Memorial University.

Rita Wong is the author of four books of poetry: monkeypuzzle (Press Gang, 1998), forage (Nightwood Editions, 2007), sybil unrest (Line Books, 2008, with Larissa Lai) and undercurrent (Nightwood Editions, 2015). forage was the winner of the 2008 Dorothy Livesay Poetry Prize and Canada Reads Poetry 2011. Wong is an associate professor in the Critical and Cultural Studies department at the Emily Carr University of Art and Design on the unceded Coast Salish territories also known as Vancouver.

Hiromi Goto is the award-winning author of many books for youth and adults. Her adult novel, Chorus of Mushrooms (1994) was the recipient of the regional Commonwealth Writers' Prize for Best First Book as well as co-winner of the Canada-Japan Book Award. Her second adult novel, The Kappa Child, was awarded the James Tiptree Jr. Award. Hopeful Monsters was her first collection of short stories and in 2009, she co-wrote, with David Bateman, her first book of poetry, Wait Until Late Afternoon. More recently her YA novel, Half World, was winner of the 2010 Sunburst Award and the Carl Brandon Parallax Award and was longlisted for the IMPAC-Dublin Literary Award. Her latest YA publication is Darkest Light. Hiromi is also a mentor at Simon Fraser University's The Writer's Studio, an editor, and monther of two grown children. She is at work on graphic novels and short stories.

In honour of its 20th anniversary, NeWest Press released a special edition of her seminal Chorus of Mushrooms in Spring 2014.

Born in Windsor, Nova Scotia, at the beginning of the 1960s, George Elliott Clarke is a seventh-generation Africadian. He has published more than a dozen volumes of poetry and prose, including Whylah Falls and Execution Poems, an acclaimed novel George & Rue, and the celebrated opera, Beatrice Chancy. His many awards include the Governor General's Award for poetry and the Martin Luther King Jr. Achievement Award.

Judith Thompson is a two-time winner of the Governor General's Literary Award for White Biting Dog and The Other Side of the Dark. In 2006 she was invested as an Officer in the Order of Canada and in 2008 she was awarded the prestigious Susan Smith Blackburn Prize for her play Palace of the End. Judith is a professor of drama at the University of Guelph and lives with her husband and five children in Toronto.

Stephen Henighan is the author of six novels, four collections of short stories, and six books of essays, criticism, or reportage. His work has been published in Ploughshares, The Malahat Review, The Globe and Mail, The Times Literary Supplement, Geist magazine, and The Walrus, among others. He has translated novels into English from Portuguese, Spanish and Romanian and is General Editor, Biblioasis International Translation Series. He is currently a professor of Spanish and Hispanic Studies at the University of Guelph.

Michael Ondaatje is a novelist and poet perhaps best known for his Booker Prize-winning novel adapted into an Academy Award-winning film, The English Patient. His other books include Secular Love, In the Skin of a Lion, Running in the Family, and The Collected Works of Billy the Kid. He edited From Ink Lake, a selection of Canadian stories, and has won several Governor General's Award for both fiction and poetry.

Leanne Betasamosake Simpson is a renowned Michi Saagiig Nishnaabeg scholar, writer and artist, who has been widely recognized as one of the most compelling Indigenous voices of her generation. Leanne's books are regularly used in courses across Canada and the United States including Dancing on Our Turtle’s Back, The Gift Is in the Making, Lighting the Eighth Fire (editor), This Is An Honour Song (editor with Kiera Ladner) and The Winter We Danced: Voice from the Past, the Future and the Idle No More Movement (Kino-nda-niimi editorial collective). Her paper "Land As Pedagogy" was awarded the Most thought-provoking 2014 article in Native American and Indigenous Studies. Her latest book, As We Have Always Done: Indigenous Freedom Through Radical Resistance is being published by the University of Minnesota Press in the fall of 2017. As a writer, Leanne was named the inaugural RBC Charles Taylor Emerging writer by Thomas King. She has published extensive fiction and poetry in both book and magazine form. Her second book of short stories and poetry, This Accident of Being Lost is a follow up to the acclaimed Islands of Decolonial Love and was published by the House of Anansi Press in Spring 2017. Leanne is Michi Saagiig Nishnaabeg and a member of Alderville First Nation.

". ..readers will find other delights in this wonderful buffet of delicious writing. Don’t miss the feast. "

". ..thoughtful, wise, funny and always original. If you ever wanted to burrow into the minds of some of CanLit’s greatest living treasures, this is your chance. A keeper. "

Other titles by Tessa McWatt

Other titles by Rabindranath Maharaj

Other titles by Dionne Brand

Other titles by Margaret Atwood

Other titles by Pascale Quiviger

Other titles by Rita Wong

Other titles by Hiromi Goto

Other titles by Judith Thompson

Other titles by Michael Ondaatje

Other titles by Leanne Betasamosake Simpson