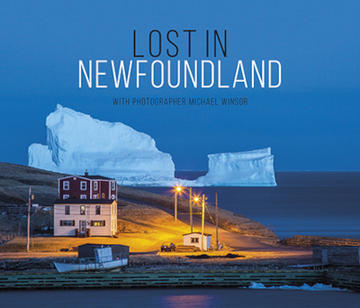 Lost in Newfoundland is an artistic compendium of Newfoundland’s visual wonders—its seascapes, landscapes, cityscapes, and natural inhabitants. This is a fine-art homage to an island where, as Michael Winsor himself suggests, “Every cove, inlet, tickle, island, bay, peninsula, ... Read more

Lost in Newfoundland is an artistic compendium of Newfoundland’s visual wonders—its seascapes, landscapes, cityscapes, and natural inhabitants. This is a fine-art homage to an island where, as Michael Winsor himself suggests, “Every cove, inlet, tickle, island, bay, peninsula, point, or arm is more beautiful than the next. ”

MICHAEL WINSOR is the leading landscape photographer in Newfoundland. His images have been exhibited across Canada, and his award-winning photograph of the Ferryland iceberg was selected to represent the province on an international postage stamp by Canada Post. Winsor is the founder and owner of Newfoundland Photo Tours, and he lives in St. John’s.

"As an artbook, this volume, Lost in Newfoundland is itself a little work of art. Fronted with a luminously-hued hard cover, the pages inside aren’t numbered, but altogether it makes a nice rectangular heft that fits neatly in the hand. And it doesn’t hurt that that cover image is Michael Winsor’s view of an iceberg in Ferryland, drifting past Newfoundland and Labrador’s vernacular architecture of sheds and boats, which achieved global renown. .. [Lost in Newfoundland is] an album of full-coloured photos, either a duet of images or single one laid out over a two-page spread, all offset with brief italicized captions. There’s an Atlantic puffin in noble solitude; then a trio of three stand apace, one checking out the camera. Or a yellow spectrum of the Bonavista lighthouse. Or a northern gannet curled into itself, beside clouds over Gros Morne Mountain. .. Horizons configure the imagery: one third, one half, three fourths, calibrated from the photographer’s point of view. There are adventurous fauna sightings, like a swimming polar bear, a stalking lynx, or an alert bald eagle. Other highlights include the lacey monochrome of Bowring Park, 'after the first snowfall of December,' the bridge and trees demarcated with a scrim of white flakes. Lots of beguiling finds in getting lost. "

"[Lost in Newfoundland] works like the perfect photo album of the perfect trip to Newfoundland—one not limited by vacation time, and in which we see all the beauties promised to us by the advocates for Newfoundland tourism. If you wanted to convince someone to visit that province, this book would be a powerful aid. "

“You are sure to get lost in Winsor’s landscapes and nature scenes, before you even crack the spine of this art photography book. The cover features an arresting scene of a massive iceberg hovering over the houses, fishing sheds and boats in Ferryland. Captured during the twilight ‘blue hour’, the sky appears a luminous dark blue. The juxtaposition of light and dark is a theme that plays out throughout the book. A breaching humpback whale backlit by a golden yellow sky, the sun setting behind the mountains. A pitch-black sea and sky make the glowing red and yellow structures lining the shore in Newtown look otherworldly. A full moon’s light seemingly answered by the light of the lighthouse at Fort Amherst. These playful light and dark notes fit perfectly with the book’s featured creatures: a swimming polar bear, two Atlantic puffins touching beaks and a sun-loving fox kit are sure to please. ”

“This little gem of Newfoundland's seascapes, landscapes, cityscapes, and natural inhabitants is a lovely way to see this beautiful eastern province until visiting in person. All the photographs are so vibrant and absolutely beautiful! I loved flipping through this, seeing and learning about Newfoundland. My children have also enjoyed looking at these photos, and discovering another part of Canada. ”