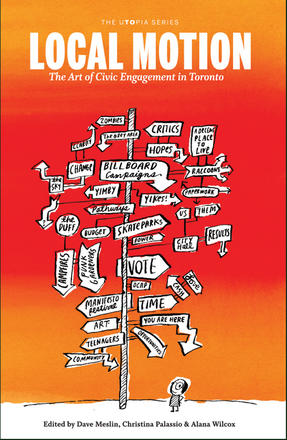 Decisions about the things that matter most on a daily basis – our roads and schools and houses – happen at the city level. So, how do we influence these decisions? What motivates ordinary citizens to take action and improve their community? How do neighbours organize together? ... Read more

Decisions about the things that matter most on a daily basis – our roads and schools and houses – happen at the city level. So, how do we influence these decisions? What motivates ordinary citizens to take action and improve their community? How do neighbours organize together? Does City Hall facilitate engagement, or stand in the way? Local Motion explores how we, as citizens, can make a positive change in our city.

Shifting from the 'what' of the previous uTOpia books to 'how,' Local Motion presents an in-depth analysis of civic engagement in Canada's largest city. Essays by fourteen in-the-trenches journalists explain what makes one city, Toronto, tick and stall. They explore electoral reform, civic organizations, zoning, the 'creative city,' budgeting and guerrilla activism. They profile people and groups who've made things happen. They give practical advice on navigating bureaucracy and getting the media's attention. Taken together, these in-depth essays and profiles paint a citizen-focused portrait of a city in transition, offering up myriad examples of how the people who live there help to make their city a better, more humane one.

‘There is so much disappointment in conventional politics. But cities and neighbourhoods are spaces where transformation is still within reach; indeed, it happens every day. This original and inspiring book arms us with the practical tools we need to change our communities for the better, regardless of which politicians are in power. Read it and find out where the action is. ’ – Naomi Klein

‘If our greatest asset as a city is our people, it stands to reason that, genuinely engaged, and liberated to think outside the box, the people of Toronto are the ones who can ensure that we build a city that is a model to the world. Local Motion is the “how to” book on building that great city. Over to us. ’ – John Tory

Other titles by Alana Wilcox

Other titles by Christina Palassio