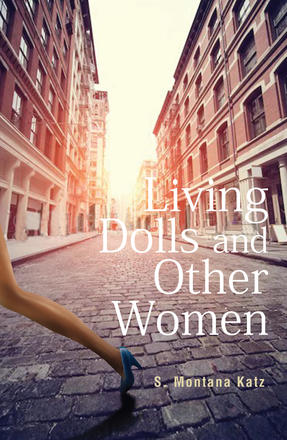 Living Dolls and Other Women

Living Dolls and Other Women

In our era of #MeToo and fresh attempts to break the gender biased holds on our culture, a portrait of gender bias in the art world offers a microcosm of the pervasive challenges to achieving equality. Living Dolls and Other Women provides a fictionalized account of that world ... Read more

In our era of #MeToo and fresh attempts to break the gender biased holds on our culture, a portrait of gender bias in the art world offers a microcosm of the pervasive challenges to achieving equality. Living Dolls and Other Women provides a fictionalized account of that world set against the pervasive sexual harassment in every corner of urban daily life. Set in the late 1980s, with New York City in the middle of a real estate crash, Living Dolls and Other Women chronicles the lives of five urban women as well as an activist organization comprised of women in the art world, the Living Dolls. Living Dolls and Other Women is an urban drama, chock full of action: crime, mystery, culture, and romance. The book takes on the contemporary issues of sexual harassment and discrimination, artistic merit, feminism, family values, and sexual preference. It delves into the main characters’ lives and traces dramatic and personal transformations of each. The comical yet dead serious antics of the Living Dolls thread through the novel as the backbone of the book

Montana Katz is a psychoanalyst. She has written two novels, a play, books on psychoanalysis, and two award-winning books on gender bias. Her writing is situated at the confluence of fact, history and the unconscious.

Living Dolls and Other Women is a wonderful read. I was intrigued from the first opening pages—which suggest that a violent and threatening presence is amongst the characters—and remained engrossed until the end. Montana Katz does a great job of creating a murder mystery that also reminds us of the threats and violence faced by women. These women’s lives are connected by a string of gruesome crimes in the NYC arts scene toward the end of the 20th century—crimes that may or may not be linked to a vigilante group calling themselves the “Living Dolls".

In this deeply affecting novel, Living Dolls and Other Women, Montana Katz allows us to see what women and girls endure in all aspects of our culture. It is a fictionalization of what is all too real and it is Katz’s brilliant rendering that makes us recognize the truth; grateful for her creative and accessible route to the reality she observes. The art scene in New York City in the 1980s comes astonishingly to life and we are given an eye-opening glimpse of the effects of gender bias on girls and women as in Montana Katz’s previous novel, the scary and compelling Side Effects: A Footloose Journey to the Apocalypse about climate catastrophe. Living Dolls turns out to be romance novel, spine tingling mystery, and tragedy—a page turner—yet never loses sight of the deepest truths of gender bias and its dehumanizing effects on us all.

Montana Katz is a treasure. She can write, imagine and fictionalize the issues we know so well better than anyone. Living Dolls are finely drawn characters trying to thrive in a world held hostage to harassment every which way they turn in the good old–bad old days when Soho was the Paris of the 80’s.

— Oralee Wachter, New York Times bestselling author of No More Secrets For Me

Other titles by S. Montana Katz