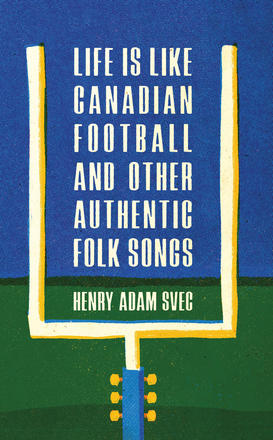 Life Is Like Canadian Football and Other Authentic Folk Songs

Life Is Like Canadian Football and Other Authentic Folk Songs

Henry Adam Svec has been pushing boundaries in Canadian folklore since he unearthed songs by CFL players in Library and Archives Canada, thereby thrusting himself into the scene—and the media spotlight. Those spartan ... Read more

Henry Adam Svec has been pushing boundaries in Canadian folklore since he unearthed songs by CFL players in Library and Archives Canada, thereby thrusting himself into the scene—and the media spotlight. Those spartan poems are finally included in this anthology, in addition to the fruits of his subsequent expeditions, but there is much more besides, including honest accounts of the folklorist’s myriad trials and tribulations. This experimental and genre-defying book mixes the adventurous energies of Alan Lomax and Stompin’ Tom, the intertextual conceptualism of Vladimir Nabokov and Mark Z. Danielewski, and the searing intensity of Elizabeth Smart and Chris Kraus.

Henry Adam Svec is the author of American Folk Music as Tactical Media . His writing has appeared in The New Quarterly, C Magazine, MOTHERBOARD, and elsewhere, and his musical performances have been presented in galleries and festivals including 7a*11d, FADO, and Sappyfest. He is also co-creator of Donair Academy, a digital role-playing game exploring AtlanticCanadian cuisine. He was raised on a cherry farm near Blenheim, Ontario, and has also lived in New Brunswick and Mississippi. He currently teaches at the University of Waterloo.

"This book is cracking me up—and I don't even like football—but it is just so well written and gets into archiving and notions of authenticity, the faux footnotes got me scrambling wishing that some of the not real sources were real, like Dane Spounge, The Origin of Canadian Beat and Spoken Word Poetry, 1998. "—Robert Dayton, author of The Canadian Romantic

"A book that twangs and spirals—sui generis in the history of Canadian literature. Svec exhibits the acumen of Marshall McLuhan, the heart of Rita MacNeil, and the meticulous truthfulness of Farley Mowat. "—Sean Michaels, Scotiabank Giller Prize winner and author of The Wagers

"The study of folksingers and their songs is above all a quest for authenticity—an idea fiercely debated yet rarely defined. Into this melee of currents comes Henry Adam Svec’s flagship, in the form of a book that wants to find the truth as much as anyone, but in a mirrored hall of connected folk personas that are all real in their own way: who we are, who we think we are, and who we want or need to be. It is deeply personal as much as it is a rich performance—like the best folk songs are. "—Kate Beaton, author of Hark! A Vagrant

"Fact and fiction blend and blur throughout the pages of the life of this intrepid folksong collector. What do seventies football players, itinerant rock musicians, bureaucratic academics and artificial intelligence all have in common? Possibly nothing, but this book—with trenchant wit and performative verve—connects these and many other dots, at the same time ensuring you’ll completely enjoy the ride. Perhaps we are all folklorists in the end, searching for an authenticity that can take us out of our comfort zones, replacing them with songs we didn’t know we needed but now will always want to sing. Henry Adam Svec shows us how. "—Jacob Wren, author of Polyamorous Love Song and Authenticity Is a Feeling