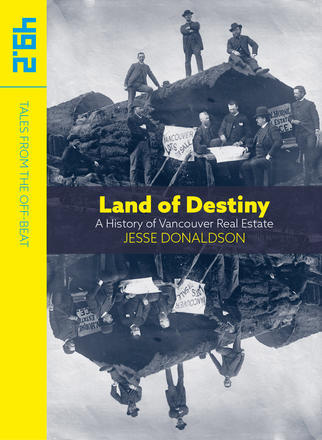 BC Bestseller!Even before it was a city, Vancouver was a property speculator's wet dream. "There are more speculators about New Westminster and Victoria than there were in Winnipeg during the boom," CPR Chief WC Van Horne warned a friend in 1884, "and they are a much sharper ... Read more

BC Bestseller!Even before it was a city, Vancouver was a property speculator's wet dream. "There are more speculators about New Westminster and Victoria than there were in Winnipeg during the boom," CPR Chief WC Van Horne warned a friend in 1884, "and they are a much sharper lot. Nearly every person is more or less interested and you will have to be on your guard against all of them. "Ever since Europeans first laid claim to the Squamish Nation territory in the 1870s, the real estate industry has held the region in its grip. Its influence has been grotesquely pervasive at every level of civic life, determining landmarks like Stanley Park and City Hall, as well as street names, neighbourhoods, even the name "Vancouver" itself. Land of Destiny aims to explore that influence, starting in 1862, with the first sale of land in the West End, and continuing up until the housing crisis of today. It will explore the backroom dealings, the skulduggery and nepotism, the racism and the obscene profits, while at the same time revealing that the same forces which made Vancouver what it is, speculation and global capital, are the same ones that shape it today, showing that more than anything else, the history of real estate and the history of Vancouver are one and the same. And it's been dirty as hell. About the Series: Land of Destiny is the first title in Anvil's new series "49. 2: Tales from the Off Beat," an ongoing series dedicated to celebrating the eccentric and unusual parts of city history. From Jesse Donaldson, author of the Bill Duthie Booksellers' Choice Award finalist book This Day In Vancouver, and a host of other local historians, the series will be an in-depth examination of the weird, the wonderful, and the terrible, injecting fresh details into well-worn local lore, or digging deep into the obscure people, places, and happenings of the last 130 years. From psychedelic hospitals to town fools, from communist organizers to real estate scumbags, 49. 2 will take pains to break down the myths surrounding the City of Glass.

Other titles by Jesse Donaldson