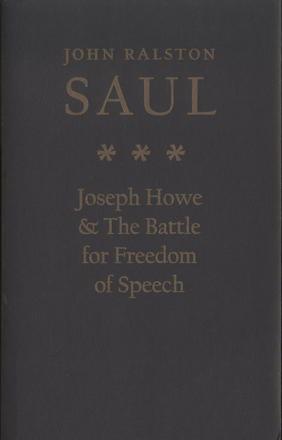 Joseph Howe and the Battle for Freedom of Speech

Joseph Howe and the Battle for Freedom of Speech

On 20 March 2004, John Ralston Saul delivered the inaugural Joseph Howe lecture at King’s College School of Journalism in Halifax, Nova Scotia. One of Canada’s foremost thinkers on issues of media, politics and society, Saul spoke to the legacy of Joseph Howe, his famous ... Read more

On 20 March 2004, John Ralston Saul delivered the inaugural Joseph Howe lecture at King’s College School of Journalism in Halifax, Nova Scotia. One of Canada’s foremost thinkers on issues of media, politics and society, Saul spoke to the legacy of Joseph Howe, his famous defense in 1835, and of his contributions to a distinctly Canadian position on freedom of speech and freedom of the press. His speech recalls a time when political debate was prioritized in society and covered by the media, and when the democratic foundations of this country were first articulated and then pursued via social reforms.

“We’re curious. And we’re actually not in a rush,” says Saul of our current situation. Why then, with the collective level of education and individual life expectancy steadily on the rise, have we not allocated more time to engaging in public debate of ideas and to covering these debates in the media? Why, when the creation of Canada as a country is still remembered as the result of all-night discussions and passionate engagement, have we not chosen to continue discussion simply as a means of maintaining an active, conscious citizenry?

Saul applauds the examples of responsible, courageous investigative journalism in evidence today, and urges a wider move away from the results-focused, low-content buzz that comprises so much of mainstream media both in print and on television, and which stands in direct contradiction with participatory democracy and with freedom of the press. Cutting through murky constructs like intellectual-property rights and access to information, he identifies the journalistic challenge of locating shapes in the mass of information and beneath the misleading hype around secrets. In a style that is highly articulate, humorous and emphatic, John Ralston Saul provides a succinct, relevant look at Canadian history, our current whereabouts, and an ambitious rally for participatory democracy and intelligent media for the future.

John Ralston Saul is one of Canada’s leading social and political commentators. He is the author of numerous books on philosophy and contemporary politics, including Voltaire’s Bastards, Reflections of a Siamese Twin, and most recently The Collapse of Globalism. Saul was the Massey lecturer in 1995, and won the 1996 Governor General’s Award for nonfiction for The Unconscious Civilization, based on those lectures. He is the former president of PEN Canada and the creator of the acclaimed LaFontaine Baldwin Lecture series. A regular speaker and panelist across Canada and internationally, John Ralston Saul currently lives in Toronto.