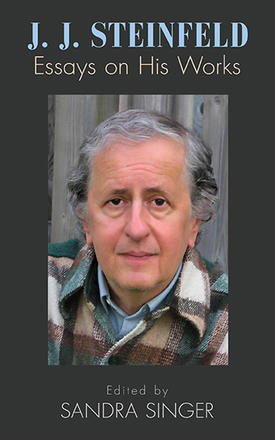 A critical look at PEI writer J. J. Steinfeld's extensive and prolific writings in poetry, fiction and theatre, ranging from his early work on Holocaust themes to his later examinations of absurdity and existentialism. Among the contributors: Raina L. Shults, Michael Greenstein, ... Read more

The pervasive and dominant image in my life and imagination, today in memory and growing up the only child of Holocaust survivors, was my mother's concentration camp number/tattoo. Attempting to deal with that image and memory, in no small part, made me compelled to become a writer. -- J. J. Steinfeld

Oscillating between the chronotopes of World War II and contemporary North America, [Steinfeld’s] narratives form intriguing circuits of connection and disconnection […]. Steinfeld’s conversation with Kafka accords with the view that history’s clocks are not in unison and that their worlds split apart and clash in fearful asymmetry.

[Our Hero in the Cradle of Confederation] captures the “laissez faire” spirit of our times where, as metaphoric Islander, one may cast an ironic, critical gaze, smell disparity and hypocrisy, and feel desperation within the Island’s shores and ideological tides, yet retain “hope” and aspire to “fight back. "