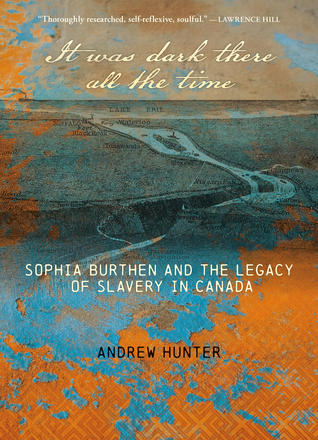 It Was Dark There All the Time

It Was Dark There All the Time

“My parents were slaves in New York State. My master’s sons-in-law … came into the garden where my sister and I were playing among the currant bushes, tied their handkerchiefs over our mouths, carried us to a vessel, put us in the hold, and sailed up the river. I know ... Read more

“My parents were slaves in New York State. My master’s sons-in-law … came into the garden where my sister and I were playing among the currant bushes, tied their handkerchiefs over our mouths, carried us to a vessel, put us in the hold, and sailed up the river. I know not how far nor how long — it was dark there all the time. ”

Sophia Burthen’s account of her arrival as an enslaved person into what is now Canada sometime in the late 18th century, was recorded by Benjamin Drew in 1855. In It Was Dark There All the Time, writer and curator Andrew Hunter builds on the testimony of Drew’s interview to piece together Burthen’s life, while reckoning with the legacy of whiteness and colonialism in the recording of her story. In so doing, Hunter demonstrates the role that the slave trade played in pre-Confederation Canada and its continuing impact on contemporary Canadian society.

Evocatively written with sharp, incisive observations and illustrated with archival images and contemporary works of art, It Was Dark There All the Time offers a necessary correction to the prevailing perception of Canada as a place unsullied by slavery and its legacy.

Andrew Hunter is a freelance curator, artist, writer, and educator. Hunter was previously the Frederik S. Eaton Curator of Canadian Art at the Art Gallery of Ontario, where he produced major exhibitions and publications including Every Now Then: Reframing Nationhood, In the Ward: Lawren Harris, Toronto & the Idea of North, and Colville.

Born in Hamilton and a graduate of the Nova Scotia College of Art & Design, Hunter has held curatorial positions across Canada, including at the Vancouver Art Gallery and the Art Gallery of Hamilton. He has taught at the Ontario College of Art and Design University and the University of Waterloo and lectured on curatorial practice across Canada, the United States, England, China, and Croatia. He is a member of the advisory board for the Institute for the Study of Canadian Slavery at NSCAD.

“Through the narrative of Sophia Burthen, Andrew Hunter completely reframes Canadian history — as well as the history of his hometown Hamilton — and turns it on its head. Readers, perhaps for the first time, see the world through the eyes of Burthen and her Black contemporaries, through their plight of enslavement, their liberation, and their presence on these shores. This work, coming at a moment of racial reckoning, is timely and important. ”

— Adrienne Shadd, author of <i>The Journey from Tollgate to Parkway</i>

“Andrew Hunter’s deep dive into Canadian and American history goes down trails and pathways not always explored. He has managed to bring to life history that affects us all. Sophia Burthen’s existence as a Black enslaved child is examined and Hunter directs the reader to know her sensitively and intimately. I am grateful to Hunter for ripping apart the archives and finding details that are left unanswered. ”

“It Was Dark There All the Time is a book to read slowly, to think about and to learn from, to be read carefully more than once. Hunter brings a critical eye to the research and the emotional and mental work needed to share these stories. ”

“A thoroughly researched, self-reflective, soulful meditation on the life of Sophia Burthen, who was enslaved in eighteenth- and nineteenth- century Canada. Hunter’s book is a searing indictment of the historic and ongoing racism experienced by Indigenous and Black Peoples in Canada and the United States. To read it is to peer into the kind but unflinching heart of a white ally who is committed to recognizing, contextualizing, and confronting injustice in the Americas. ”

“It Was Dark There All the Time is exhaustively researched and intriguingly wide in scope. . .. Out of the scant details that we have of an enslaved woman’s life, Hunter and his editors have built a kind of epic reckoning and, for Hunter, a personal one, drawing as he does on elements of his own life. ”

Other titles by Andrew Hunter