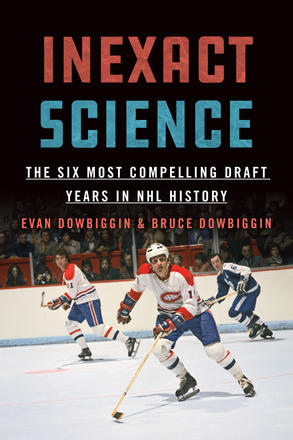 From Guy Lafleur to Sidney Crosby to Connor McDavid, the annual draft of hockey’s most talented young prospects has long been considered the best route to Stanley Cup glory. Inexact Science delivers the remarkable facts behind the six most captivating NHL Drafts ever staged and explores the lessons learned from guessing hockey horoscopes. How did it change the business of the sport? And where is the draft headed next? The authors answer intriguing questions like: What if Montreal in 1971 had chosen Marcel Dionne No. 1 overall and not Guy Lafleur? How exactly is it that Wayne Gretzky went undrafted? How did the Red Wings turn their franchise around so dramatically in the 1989 Draft? Evan and Bruce Dowbiggin also delve into the controversies, innovative ideas, and plain old bad judgment that’s taken place on the draft floor. Always informative and entertaining, Inexact Science encapsulates the many compelling, wild, and unique stories in five-plus decades of NHL Draft history.

Yes, the draft is a puzzle that can be solved many ways. It is the way to victory. And the road to ruin as well. From Guy Lafleur to Sidney Crosby to Connor McDavid, the annual draft of hockey’s most talented young prospects has long been considered the way to riches for its top talents and the path to the greatest heartache and disappointment as well. Each June, the hockey world convenes to see the game’s young stars chosen by their future teams (or the first of their NHL teams). Callow juniors and their parents wait in anticipation for the call that will shape their destiny. Though owners and general managers have attempted to use trades and/or free agency to build their clubs into winners over the years, it’s the NHL draft that has proven the special sauce in creating a championship-calibre operation. Since the introduction of a hard salary cap in 2005, drafting has seen an even greater onus placed on it.

With Inexact Science, the curious and captivating events of the NHL draft’s five-plus decades will be told through the six most compelling years in its history. In addition to analyzing these top draft years, “Inexact Science” will show the lessons learned from the process of guessing hockey horoscopes, how it changed the business of the game and finally where the draft is headed next. By looking at what history has shown us, the final chapter of the book will demonstrate the ways in which the best organizations in pro hockey today have played the crapshoot of the draft so expertly. Light will be shed not only on the sure shots or diamonds in the rough, but also the supposed can’t-miss prospects who indeed did somehow miss and the general managers who paid the price for getting it all so wrong.

There have certainly been a fair share of controversies, blockbuster trades, innovative ideas and/or plain old bad judgement that made up these six most intriguing years and in this book, several lingering points of interest will be delved into. For example, just how did the Detroit Red Wings get the jump on the European talent bonanza (namely the Russian revolution) to propel them to a quarter century of runaway success? Why were Sam Pollock’s Montreal Canadiens able to exploit the inexperience and mismanagement of the NHL’s bumbling expansion teams to their benefit at the draft, en route to Stanley Cup after Stanley Cup? And why exactly is 1979 considered perhaps the greatest draft of all time and how did it come to be seen that way?

“Evan and Bruce Dowbiggin take the reader down a fascinating road that will be loved by hockey fans everywhere. To suggest, however, that its appeal will only be to hockey nuts and stat geeks is to sell it far too short. Inexact Science has much broader appeal. It has much to teach us about the importance of selecting and developing top talent and it offers interesting historical nuggets and perspectives about everything from Quebec to the former Soviet Union. Heading into the holidays, if you’re looking for a perfect stocking stuffer, Inexact Science is exactly what you need. ” — Policy Magazine

Other titles by Bruce Dowbiggin