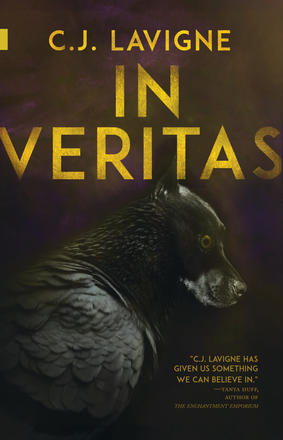 In this fantastic and fantastical debut, C. J. Lavigne concocts a wondrous realm overlaying a city that brims with civic workers and pigeons. Led by her synesthesia, Verity Richards discovers a hidden world inside ... Read more

In this fantastic and fantastical debut, C. J. Lavigne concocts a wondrous realm overlaying a city that brims with civic workers and pigeons. Led by her synesthesia, Verity Richards discovers a hidden world inside an old Ottawa theatre. Within the timeworn walls live people who should not exist—people whose very survival is threatened by science, technology, and natural law. Verity must submerge herself in this impossible reality to help save the last traces of their broken community. Her guides: a magician, his shadow-dog, a dying angel, and a knife-edged woman who is more than half ghost.

With great empathy and imagination, In Veritas explores the nature of truth and the complexities of human communication.

C.J. Lavigne was born in Kingston, ON, but grew up all over Canada, from Comox, BC to Barrington Passage, NS. Since 2007, she has divided her time between Ottawa, ON, and Red Deer, AB, where she currently resides and works as a professional communications scholar who writes on television, gaming, and popular culture; at other points in her life, she's been a barista, tech support supervisor, marketing manager, freelance editor, and--briefly--radio DJ. In Veritas is her first novel and is part of the Nunatak First Fiction Series.

"For a story about those struggling to exist in a world that cannot see them, whose gaze and language limits and alters, using dreamlike and distorted description with words that will never be quite right is the only way to tell it. "
~ Nadia Tudhope, The Cascade

"Lavigne’s debut urban fantasy novel, part of the 'Nunatak First Fiction' series, is full of wonder, darkness, and hope. ... Reminiscent of the best of Charles de Lint, this is a book readers will not want to put down. "
~ Jennifer Beach, Library Journal

"[We] walk away from the book with a better understanding of what we choose to see and not see, and how our own stories—consciously and unconsciously filtered through our own perspectives and biases—can simultaneously tell only part of the truth while also revealing the core of who we are. "
~ V. F. Armstrong, Strange Horizons