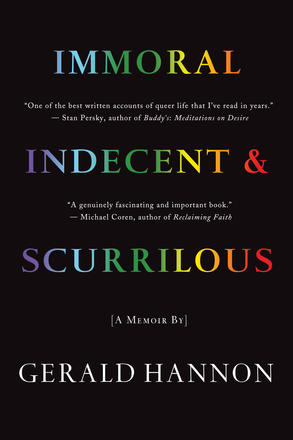 “At least by reputation, I am a sex radical: gay activist dating back to the Cretaceous, defender of pedophiles, defender of (and participant in) sex work, sometime porn actor and maker, shameless voyeur (no window is safe if my binoculars are at hand), perpetual sour-puss on the subject of gay marriage. I came of age in the 1960s and ’70s, an era when most of those character traits and activities would have been seen as illegal at worst and shameless at best. Some still are. Others — gay marriage, for example — have switched sides, transitioning from what many people thought of as an unthinkable and illegal travesty to a ritual celebrated in a growing number of jurisdictions, Canada included. ”

When 18-year-old Gerald Hannon left the small pulp mill town of Marathon, Ontario to attend the University of Toronto, he never would have predicted he’d become part of LGBTQ2S+ history. Almost sixty years later, he reflects on the major moments in his career as a journalist and LGBTQ2S+ activist. From the charges of transmitting immoral, indecent, and scurrilous literature laid against him and his colleagues at The Body Politic to his dismissal from his teaching post at Ryerson University for being a sex worker, this memoir candidly chronicles Hannon’s life as an unrepentant sex radical.

Gerald Hannon is a journalist and has been an LGBTQ+ rights activist since the 1960s. Hannon has won thirteen National Magazine Awards and written for the likes of The Body Politic, Xtra!, and Toronto Life. Originally from Marathon, ON, he now lives in Toronto.

“I don’t agree with everything that Gerald Hannon believes and writes, but this is a perceptive and personal insight into a slice of Canadian history, sexual politics, and media that I can’t imagine anybody else being qualified or able to deliver. A genuinely important and fascinating book. ”

“Gerald Hannon’s memoir of an ‘unrepentant sex radical’ provides all the Immoral, Indecent, and Scurrilous tales its tempting title promises. As a gay activist, prizewinning journalist, writing instructor, sex worker, and choral and opera singer, Hannon explores the ‘passionate communities’ that comprise his remarkable life. This is one of the best-written accounts of being ‘queer’ that I’ve read in years, and it’s a crucial addition to Canadian LGBTQ2S+ history. ”

“Gerald Hannon is a gifted writer who tells his story with penetrating insight, gentle humour, and eye-widening honesty. I didn’t always agree with his sex-radical stances, but always admired his tireless challenge to conventional norms. His writing career included unflinching profiles of notable Canadian personalities, invariably exploring paths no one else would dare. Now, he has done the same with his own remarkable life, extending from altar boy to gay liberation activist, and then much-honoured journalist. Every part of this memoir carries critically important lessons about the meanings of free speech, journalistic integrity, and sexual desire — lessons as important now as ever. ”

“Hannon’s memoir is a queer history page-turner. His account of losing his job as journalism teacher when his private life as sex worker exploded into a media sensation should be a case study in journalism programs everywhere. Recalling The Body Politic trials, the bathhouse raids, and dying friends, he turns a welcome spotlight on Toronto’s tumultuous queer activism of the 1970s and 1980s. ”

“This memoir allows him to live on in his own words, a vibrant queer voice that remains as radical and transgressive as it was in the '70s. ”

“Poignant, passionate, and irreverent, Immoral, Indecent, and Scurrilous tells the story of one of Canada’s original gay liberationists. It follows Gerald Hannon from a not-so-auspicious childhood in a small town on the shores of Lake Superior to a coming out and of age in Toronto to the forefront of gay activism. Always challenging conventional (hetero)sexual norms, never afraid of arrest, scandal or hot water, the memoir spans a time of cultural, social, and sexual upheaval. It is a story of remarkable courage, occasional political naivety, and an abiding commitment to sexual liberation and living life on his own terms. ”

“Historians will find this a rich resource as time passes, offering an unflinchingly honest first-hand account of both the pain and joy surrounding the birth of gay liberation in Toronto. But for any reader, now or in the future, this is simply a delightful book, thought-provoking, and also laugh-out-loud funny. ”