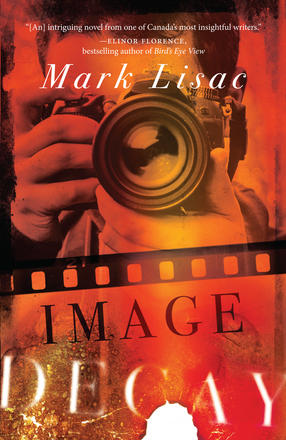 Includes author-curated discussion questions!
Mark Lisac's Image Decay returns to the pugnacious world of backroom politics laid out in his award-nominated Where the Bodies Lie. Set again in that "unnamed capital city east of the Rockies," where the Brutalist architecture of ... Read more

Includes author-curated discussion questions!
Mark Lisac's Image Decay returns to the pugnacious world of backroom politics laid out in his award-nominated Where the Bodies Lie. Set again in that "unnamed capital city east of the Rockies," where the Brutalist architecture of the downtown core reflects the body politic laid bare.

When a cantankerous ex-government photographer seeks ownership of his prints, the powers-that-be are determined to prevent the release of certain sensitive photos. Set in the 1990s, this political thriller delves into questions of identity and memory, established power and its fears and secrets, old stock versus newcomers, belonging and alienation. Image Decay investigates the intricacies of political manipulation, personal anxieties, and how history must be seen to be confronted.

"I'm taking one of Becker's dogs hostage. It's one of his special pets. He calls her Mitzi. She may or may not still be alive by the time you read this. That's up to Becker.

"The son of a bitch won't listen to reason so he'll have to deal with a madman. That's what I am now. A mad man, which is also what I am, would steal a dog and hold it hostage. A madman would try to explain himself. Which is what I'm doing now.

"Becker stole my photos. Maybe not technically. He didn't break into my shop one night and carry off the cases. He might as well have. They said I walked off my old photographer's job with a government Hasselblad. Total bull. Manchester said I could have it. It was sort of a gold watch deal, a present for years of loyal service. But after I left they wanted it back. I'd sold it by then and was still short of money.

"Becker brokered the deal to have my photos donated to the archives. I could have sold them for a lot more than the Hasselblad was worth. He knew that, the son of a bitch. It was worth it to me then to get them off my back. I was getting worried about proper storage of the negatives and prints anyway. They last a long time but need proper care.

"But here's where it went wrong. They didn't let me cull the collection first. It was pick up the boxes and go. The lawyer in Becker's department said I agreed to sell the collection and there was nothing in the agreement that said I could take anything out. Becker's a cabinet minister. He could have let me have a look through. But no. He had it in for me for some reason.

"That was bad enough. I figured I could live with it. The photos would get stored somewhere. A few of the personal shots I took on the side when I was on government work might make it into a display case at the museum. Everyone wants to see candid photos of Manchester, that old con man, and the collection of mental dwarfs he pretended helped him run the government, right? There were some nice ones of historic oil wells too.

"That wasn't to be. I've heard someone has started snooping through the collection. I wouldn't be surprised if it was Becker himself. Then I heard someone has been assigned to look into new technology that may make it possible to transfer everything into copies on a computer. It's got something to do with changing everything from physical copies to electronic simulations, the way that's happened with turning vinyl records into CDs. Instead of chemical film or grains of silver nitrate the pictures get turned into a bunch of ones and zeros in a computer. The bright boys call this digitization, I hear. You may think it sounds farfetched but I'll tell you, when I got to Hollywood in the late 1940s television sounded like a novelty. Five years later it started destroying the movies. And once real things get turned into electricity they can spread all over. They could decide to they could decide to 'digitize' everything and put it on this thing they call the Internet. Digitize. I never agreed to that. I agreed to let the photos go into the archives.

"If they go that way, their idea isn't to preserve anything, it's to chew it up and spit it out into garbage. They want to turn silver nitrate and paper into electrons. It's a perversion. Photographs are meant to record a passing moment and keep it forever. Converting them into an arrangement of electrons in a computer explodes them. It destroys them like an atomic bomb. You can't take something meant to last through time and make it ephemeral--you didn't think I knew words like that did you? Oh yeah. When I lived in Hollywood I drank now and then with screenwriters, back when they weren't afraid of words and ideas.

"Then there's the invasion of privacy. There are photos in that collection that aren't meant to be seen, at least not in my lifetime. Why didn't I destroy them, you say? Because they happened and can't be erased. Because I could not bear to see them erased from the record of life. But I thought they would be preserved out of sight, saved but unseen until it didn't matter anymore. Now it looks like someday they'll want to put these photographs on a computer network. God knows who might see them. It isn't meant to be.

"Becker is the culture minister. He could stop it. He won't. I'm going to make him stop. He loves his dogs too much to let Mitzi die. He'd let me drop a person off the bridge but he won't let me drop a dog. That's what I'm counting on anyway.

"By tomorrow this should all be cleared away. Come and see me in my shop. If I'm not out in the front I'll be in the time machine. If I'm not there I'll be in jail, or maybe the river. "

Praise for Image Decay:
"With his eye for detail and the courage to inflect his genre conventions, Lisac proves a dab hand at conveying weighty themes lightly. "
~ Maurice Yacowar, Alberta Views
"A daring quest to destroy the evidence of events best forgotten challenges the reader to examine the power of personal memory, in this intriguing novel from one of Canada's most insightful writers. "
~ Elinor Florence, bestselling author of Bird's Eye View
Praise for Where the Bodies Lie:
"What's remarkable about this novel is how brilliantly Lisac moves from political writing to fiction. His smooth prose and fine pacing make it a pleasure to read. "
~ Margaret Cannon, The Globe and Mail
"Lisac's backdrop may be the political scene, but his story is in the heart of his main characters, their flaws and aspirations. He is an elegant and efficient writer and sets lovely scenes and characters, creating a murder mystery with twists and engaging characters. "
~ Samantha Power, Vue Weekly
"Why you're going to love it: Intriguingly, Lisac has been writing about the politics of a certain oil-rich Canadian province just east of the Rockies since 1979. Parts of this novel are guaranteed to ring true. "
~ Kerry Clare, 49th Shelf

Other titles by Mark Lisac