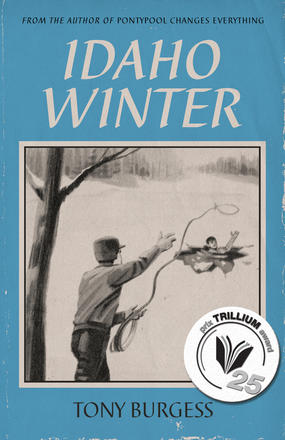 “The world of Tony Burgess is savage and blackly funny … It’s a place where you shouldn’t trust anybody, not even your narrator. ” — Uptown Magazine

“Idaho Winter is absurd and acceptable at the same time; its prose is pleasurable and unnerving. ” — Globe ... Read more

“The world of Tony Burgess is savage and blackly funny … It’s a place where you shouldn’t trust anybody, not even your narrator. ” — Uptown Magazine

“Idaho Winter is absurd and acceptable at the same time; its prose is pleasurable and unnerving. ” — Globe and Mail

Shortlisted for the Trillium Book Award

Idaho Winter is a boy who, through no fault of his own, is loathed by everyone in his town. His father feeds him roadkill for breakfast, the crossing guard steers cars toward him as he crosses the road, and parents encourage their children to plot against him. That is, until he meets a young girl named Madison who empathizes with his suffering. But when Madison is attacked by dogs meant to harm Idaho, Idaho gets up and runs home, changing the course of the entire story …

Idaho soon learns that his suffering has been cruelly designed by a clumsy writer who has made his book meaner than all the others to make it stand out. With this information, Idaho has become armed with the knowledge that the entire world is invented, and that he now has the power to change things — in a novel that is both “one of the finest parodies ever penned of the stereotypically didactic young adult novel” (Macleans) and “the most brilliantly terrifying dream you’ve ever had” (The Globe and Mail).

His bedroom is a cramped and filthy box with dingy walls that sag slightly inward, shrinking the already miserable smallness. The floor is a mulch of papers and pine cones and pop cans. Hornets hover. It is a convenient garbage can for the other residents of the house. The yellow door opens enough for someone to toss in an empty bean can. The bedroom’s only window looks out onto a dirty orange brick wall. The bed consists of two tattered towels pulled over and under four ripped and rotting life vests. The fishy stench from the bed fills the room and nearly suffocates Idaho in his sleep. Poor little Idaho. He sits up and leans over and pukes onto the back of a fat sleeping mouse. The mouse doesn’t wake. Idaho watches as other mice emerge from under Styrofoam burger containers to pick his vomit off the rising and falling fur of the obese vermin. It is the first day of school and Idaho has to go outside for the first time since last June. That was when eighth grade ended.

He had spent the last months of the school year wrapped in a coat made of tarpaper and it had burned in the sun and burned to his skin, leaving a black-red mark that still runs from the right side of his neck to the left point of his hip. He had been rolled down the hill behind the school. He had been set up on a low branch by the river so the other children could knock him off by tossing heavy rocks and lumps of hard dirt at him. The summer was spent here, in this revolting room, his back sticky with tar and his feet bruised by a winter of running away. It is difficult to describe hardship this intense. This poor, poor boy, Idaho, whose unhappiness exceeds everyone’s. No one has greater reason to give up and cry in a loathsome lump for the rest of his sad and morbid days than poor pathetic Idaho Winter.

The door opens again and a dog appears. A yellow hound with a red mouth, its head low and ready to pounce.

That is Idaho’s father. Idaho’s father, known locally as Early Winter, stomps past the boy’s room, down the stairs to the kitchen and sits at the table across from a woman. Early scoops beans in milk from a shallow pan silently, staring with menace at the woman, who is known only as Wife. She is pretty and silent and thin and probably hungry. She stares at her lap. She dare not look up. She has been forbidden to look up from her hands.

“Growler’s getting the boy. ”

A crashing noise. Pictures fall and plaster crumbles as Growler, who has Idaho’s shoulder in his jaws, knocks the boy back and forth against the hall’s narrow walls, finally dropping him at Early’s feet. Early looks down at the wretched boy. Idaho looks up, squinting in fear of this hateful man. Early’s eyes are hidden roads: cold crooked roads that carry killers back up into the woods. Early’s eyes are the same secret roads that killers take. Idaho buries his face in his thin hands.

“School. You eat what the critter found. ”

Idaho feels something kicked across his knees. He looks through his spidery fingers at the stiff raccoon. Its throat and belly are covered in flies. “Eat its cheeks and clean yer teeth with the tail. ” Idaho can see his mother’s slender feet under the table, her big toes curled and white. This is as close as he has gotten to her in many months. He sees one toe straighten and the other scoop up under her foot. These feet seem absorbed in caring for each other. Two little blind puppets that seek each other out and exchange tendernesses even here in the harshest spot on earth. Idaho feels a buzzing on his knuckles. A tear has fallen and stirred the flies from his breakfast.

“Idaho Winter is not just funny, it’s supposed to be funny … Burgess’s novel, in fact, is one the finest parodies ever penned of the stereotypically didactic young adult (YA) novel. ” — Maclean’s Magazine

“Idaho’s story is the most brilliantly terrifying dream you’ve ever had, compelling and funny at times; even the random seemingly impossible events make sense in the hands of Burgess … Idaho Winter is absurd and acceptable at the same time; its prose is pleasurable and unnerving. ” — Globe and Mail

“Burgess cleverly warps narrative convention, reinforcing common devices that are familiar to the reader so that they fall a greater distance into the unfamiliar structure of the story … Burgess scores points for creativity as he provides an incredibly rich and thought provoking read about the theory of storytelling. ” — subTerrain

“The world of Tony Burgess is savage and blackly funny … It’s a place where you shouldn’t trust anybody, not even your narrator. This is not Alice Munro’s small-town Canada. Burgess rips open the guts of Canadian literature, thankfully: someone’s got to do it. ” — Uptown Magazine

“[Burgess] proves himself to be a witty, lightning-quick conjurer of misanthropy in this brief, kaleidoscopic novel. ” —Publishers Weekly

Other titles by Tony Burgess