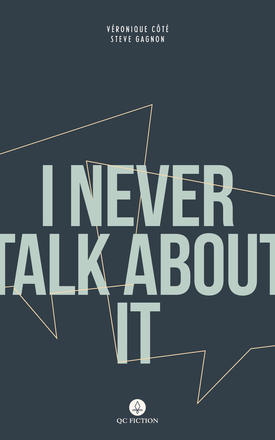 I Never Talk About It

I Never Talk About It

Cupcakes, panda bears, break-ups, wearing sunglasses at night. .. The local and the universal come together in these 37 short stories, brought into English by different translators from all over the world. This project aims to show there are all kinds of ways to bring across ... Read more

Cupcakes, panda bears, break-ups, wearing sunglasses at night. .. The local and the universal come together in these 37 short stories, brought into English by different translators from all over the world. This project aims to show there are all kinds of ways to bring across an author's voice in translation. .. at least 37 of them

While continuing to pursue a successful career as a professional artist, American-born translator Kathryn Gabinet-Kroo earned a Certificate in Translation from McGill University and a Master’s in Translation Studies from Concordia University. Working out of her Montreal artist’s studio where she still paints, she translates contemporary fiction by Quebecois and First Nations authors.

Writer and translator Natalia Heroux is the author of the novella Hum (2018). Her short fiction and translations have appeared in numerous publications. She lives in Montreal.

Felicia Mihali is a journalist, novelist and publisher who lives in Montréal. In 2012, she published her first book in English, The Darling of Kandahar, inspired by a news item reported in Maclean’s magazine. Today, she writes in French and in English. She is the founder and president of Éditions Hashtag 2018 from Montréal.

Jessica Moore is an author and literary translator. Her first book, Everything, now (Brick Books 2012), is a love letter to the dead and a conversation with her translation of Turkana Boy (Talonbooks 2012) by Jean-François Beauchemin, for which she won a PEN America Translation award. Mend the Living, her translation of the novel by Maylis de Kerangal, was nominated for the 2016 International Man Booker. The Whole Singing Ocean (Nightwood 2020) blends long poem, investigation, sailor slang and ecological grief, and was longlisted for the League of Canadian Poets’ Raymond Souster Award. She lives in Toronto.

Guillaume Morissette is the author of the collection of stories & poems I Am My Own Betrayal (Maison Kasini, 2012) and the novel New Tab (Vehicule Press, 2014), a finalist for the 2015 Amazon.ca First Novel Award, and the 2014 Hugh MacLennan Prize for Fiction. His work has appeared in Maisonneuve Magazine, Little Brother Magazine, Vice, Electric Literature, Nouveau Projet, Funhouse Magazine, The Quietus, and many other publications. He lives in Montreal.

Rhonda Mullins is a Montreal-based translator who has translated many books from French into English, including Jocelyne Saucier’s And Miles To Go Before I Sleep, Grégoire Courtois’ The Laws of the Skies, Dominique Fortier’s Paper Houses, and Anaïs Barbeau-Lavalette’s Suzanne. She is a seven-time finalist for the Governor General’s Literary Award for Translation, winning the award in 2015 for her translation of Jocelyne Saucier’s Twenty-One Cardinals. Novels she has translated were contenders for CBC Canada Reads in 2015 and 2019 and one was a finalist for the 2018 Best Translated Book Award. Mullins was the inaugural literary translator in residence at Concordia University in 2018. She is a mentor to emerging translators in the Banff International Literary Translation Program.

Dimitri Nasrallah is the author of four novels. He was born in Lebanon in 1977, and lived in Kuwait, Greece, and Dubai before moving to Canada. His internationally acclaimed books have garnered nominations for CBC Canada Reads, the International IMPAC Dublin Literary Award, and the Grand Prix du Livre de Montréal, and won the Hugh MacLennan Prize for Fiction and the McAuslan First Book Prize. He is the fiction editor at Véhicule Press.

"This offbeat collection of stories provides insights into the process of translation, raising the question of how one can truthfully replicate the stories of complex characters. " —Thomas H. Brennan, Foreword Reviews

"Even more daring and innovative than QC’s usual output . . . these are wonderful snapshots that reveal a whole life of a spectrum of individual types . . . deeply moving . . . honest and raw . . . Let me end by just recommending this collection for its unique take on the nature of translation by providing some excellent, brief but powerful stories and some thoughtful, stimulating translators’ insights. " —Simon Lavery, tredynasdays. co. uk

"An intriguing experiment . . . bringing the practice of translation out of the shadows and calling attention to its variants and nuances. " —Steven Beattie, Quill & Quire

Other titles by Véronique Côté

Other titles by Kathryn Gabinet-Kroo

Other titles by Melissa Bull

Other titles by Benjamin Hedley

Other titles by Natalia Hero

Other titles by Aleshia Jensen

Other titles by Pierre-Luc Landry

Other titles by Felicia Mihali

Other titles by Jessica Moore

Other titles by Guillaume Morissette

Other titles by Peter Bush

Other titles by Neil Smith