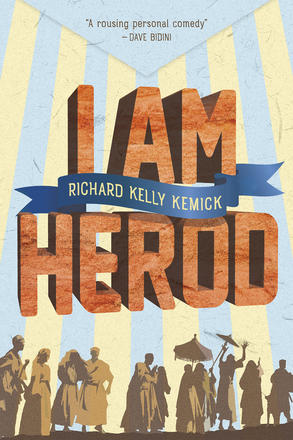 On a whim, armchair-atheist Richard Kelly Kemick joins the 100-plus cast of The Canadian Badlands Passion Play, North America's largest production of its kind and one of the main tourist attractions in Alberta. By the time closing ... Read more

On a whim, armchair-atheist Richard Kelly Kemick joins the 100-plus cast of The Canadian Badlands Passion Play, North America's largest production of its kind and one of the main tourist attractions in Alberta. By the time closing night is over, Kemick has a story to tell. From the controversial choice of casting to the bizarre life in rehearsal, this glorious behind-the-scenes look at one of Canada's strangest theatrical spectacles also confronts the role of religion in contemporary life and the void left by its absence for non-believers.

In the tradition of tragic luminaries such as David Foster Wallace, Jonathan Goldstein, and David Sedaris, I Am Herod gives its congregation of readers unparalleled access to the players of the Passion: there's Judas, who wears a leather jacket even when it's 30˚C; the Chief Sadducee, who is ostracized for his fanaticism; Pilate, the only actor who swears; the Holy Spirit, who is breaking ground as the role's first female actor; and the understudy Christ, the previous year's real-deal Christ who was demoted to backup and now performs illicit one-man shows backstage.

"Laugh out loud funny. . . . Kemick’s own faith or lack thereof is . . . one of the deeper themes that courses beneath the comedy. "

"Well-observed and poignant, this is a fascinating look into a largely unknown world. "

"Kemick's book is that delicious cross between Waiting for Guffman and The Studhorse Man, a rousing personal comedy that dances between the sweat of art and the glue of experience. Nothing like it exists in non-fiction, but don't read it for that reason. Read it because it sticks to your fingers and you can't shake it off. "

— Dave Bidini, author of <i>Midnight Light: A Personal Journey to The North</i>

"Richard Kemick spends a summer in Alberta's Bible Belt where it may be easier to find God than a vegetarian meal. There, he confronts age-old questions about belief with near-miraculous freshness, honesty, and humour. A deeply personal investigation of the blurred border between faith and imagination. "

— Marcello Di Cintio, author of <i>Pay No Heed to the Rockets: Palestine in the Present Tense</i>

"In the end, I Am Herod is a very funny book with an underlying pathos and sweetness which I found quite moving. "