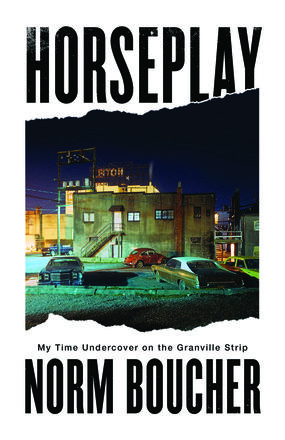 Shortlisted for the Brass Knuckles Award for Best Nonfiction Crime Book at the Crime Writers of Canada Awards of Excellence!
In his first true crime memoir, undercover operator Norm Boucher recounts eight months spent infiltrating Vancouver's heroin scene, a world of paranoia, ripoffs, and violence. It is 1983 and the War on Drugs is intensifying. From his barroom observer's seat, Boucher candidly reveals the lives of heroin addicts who spend each day looking for their next hit. Their dangerous subculture, centred around three gritty hotels on the Granville Strip, becomes Boucher's domain as he attempts both to gain acceptance in a world far removed from his own and to keep himself safe.

With Horseplay, decorated RCMP officer Norm Boucher takes readers back to the assignment that shaped his outlook on the role of criminal law enforcement and the human side of addiction as it collides with the ruthlessness of the drug business.

Norm Boucher left Montreal at the age of nineteen to begin a long and rewarding career as an RCMP officer mostly dedicated to drugs and organized crime. An active member of the RCMP undercover program for over ten years, his assignments included drug trafficking, money laundering, and homicide. He eventually represented the RCMP as a member of the Canadian delegation to several Regular Sessions of the Inter-American Drug Abuse Commission of the Organization of American States, held in Washington D.C. and Mexico City, where he helped develop a community policing program aimed at drug harm reduction. His varied career included postings on the national anti-terrorist Special Emergency Response Team, as Marine drug enforcement coordinator on Canada’s West Coast, and as liaison officer in Madrid, Spain, and Santo-Domingo, Dominican Republic.

In 1983, Staff-Sergeant Boucher spent eight months infiltrating the heart of Vancouver’s heroin scene. This experience became the subject of his memoir Horseplay: My Time Undercover on the Granville Strip, which he wrote over a period of several years, while continuing to fulfill his RCMP responsibilities in Canada and abroad. In 2012, Norm Boucher retired from the RCMP as a Staff-Sergeant, dedicating his time to writing and his work as a consultant.

Norm Boucher studied literature at the University of Waterloo. He is the recipient of the Governor General’s Medal of Bravery, the Carnegie Medal, and the Queen’s Diamond Jubilee Medal. He is the proud father of four children and now lives in Manotick, Ontario with his wife Sally and their dog Cooper.

I pull the heavy door open and see them for the first time, sitting with their backs against the wall, exactly where I was told they would be. They throw a short glance at me as I walk past them to a table near the bar. I order two drafts. I am nervous as hell, but I have worked for weeks to prepare for this, poking needles into the veins of my arms, and building a story to go with it. And it finally has meaning.

It will take time before I get anywhere close to them, so I take a sip of the cold beer, and try to decide who is dirty. Rick Crowley is sitting alone and, like the other hypes, no longer pays attention to me. I can't really tell if he or the others are dealing, but it really doesn't matter because I'm not going to score heroin tonight. I'm here for the long run, and I only want to be seen, get a feel for the place, and give them an idea of who I am before I become a threat to them. It also feels good just to see their faces.

In his late twenties, Crowley is the youngest. His ice-blue eyes are wide open and dart toward any movement, like the eyes of a cat. I know that he is violent and sneaky. I also know that Captain Kangaroo, sitting alone at the next table, has over forty years of criminal record under his belt; that Kitty Baker, chatting with a group of as yet nameless hypes, is streetwise and has been around for a while; and that Cindy, her small frame hopping from table to table, is violent. There are a few stories of knifings for fifty bucks and of undercover officers being beaten up. Everybody's record says they know the game: robbery, drug trafficking, theft, fraud, and violence all centred on heroin trafficking. To a cop, it's a world to dive into where the line between good and bad is as clear as the surface of a dead pool of water. No ambiguity. They hate you for what you represent and you hate them for what they are. The Granville Strip is full of people who would rob and kill for fifty bucks, and finding myself in this greasy hole, inside the big pulsating city, makes me feel good and scared.

I watch everything they do, how they sit, and how they talk to each other. It isn't enough to understand them. I want to be like them because this is going to be my home for the next couple of months. It has been two years since my last operation, two years of shirt and tie work in an office full of cops, and I know that it will take me a while to feel like I belong.

The heroin users stare nonchalantly at the scene in front of them. They don't pay attention to each other except for a few words here and there. Each has a glass of beer on the table. The beer has lost its foam, but it allows them to stick around for a while.

For my first day in the Blackstone we picked Welfare Wednesday, the day people get their welfare cheques, and the place is filling quickly. Bartenders in white shirts work behind large jars of pickled sausages and eggs, to pour draft beer from frosty taps into trays of empty glasses. The music is getting loud and the crowd louder, as waiters begin to hustle briskly from tables to bar and then back to tables. Ninety-five cents a draft, and when a buck is given, they keep the nickel.

An ashtray sits on Crowley's table and he taps his cigarette against it. I walk by his table to go to the pay phone and he looks at me square. I'm the intruder and this is his place, but I know who he is, and he doesn't know me. That counts for something.

Picking up the receiver, I take a deep breath and begin to relax. I look around me and let it all soak in.

People come in through the front doors and from the alley through the back door, some of them after smoking a joint. All over the bar, small round tables are covered in red terry cloth to soak up the spilled beer, the same terry cloth I have seen in every bar of every small town I have been in, working undercover from Kamloops to Fort St. John. Months of work going from small town to small town, from lumber towns nested in thick forests amid the dark Pacific mountains, to the dusty towns of the cold plains of the northern interior, with their pumpjacks looking like strange, dark birds stubbornly stabbing the ground. There is toughness about the people in these bars. Not the kind of superficial and rehearsed toughness you see in fist fights, but a higher level of self-sufficiency. You have a feeling that they do not rely on their town to keep them going, but that they are what keeps the town alive. Vancouver is different. Like most big cities, people come to it because they want a piece of it.

At the far end, near the small dancing area, you must climb a few steps to get to the pool tables. A few people sit, sipping their beer while waiting for their turn to play. As in most bars, the patrons surrounding the pool tables keep their attention on the game as they await their turn, their quarters lining up on one of the edges of the tables. Playing pool is always a good way to get into a bar crowd. I like the game and, being a little shy, I often use it to get into the local scene. Nothing like sinking the eight ball, taking a sip of beer, and then waiting for the next in line to come and play. And when you lose, you sit and talk, and it goes on from there. I am tempted to go over and lay a quarter on the table, but it would take me too far away from the heroin dealers, so I decide to go at it cold somewhere else.

In the middle of the floor, thick cigarette smoke rises above a number of tables pulled together to accommodate a large group. Partiers who appear to know each other well, couples coming down to the Blackstone to blow off some steam, hear the music, and have some beers. They don't interact with anyone else so I'll probably not see them again. I figure it best to stay away from the centre of the room. I need regulars, people who will remember me, and with whom I can connect tomorrow or the next day. Regulars usually have a favourite table in a corner of the bar. They don't hang out somewhere in the middle. I look at the older couple sitting at a table next to mine. I didn't think much about them when I came in and they don't seem to have anything to do with the heroin dealers, but they are having a good time, and they seem to know a few of the regulars.

Looks to me like a good place to start.

Praise for Horseplay: My Time Undercover on the Granville Strip:
"True crime buffs will find much to admire in this eye-opening personal narrative. "
~ Publishers Weekly
"Boucher offers a gripping, novelistic account of his eight months as an undercover drug agent for the Royal Canadian Mounted Police in Vancouver, British Columbia, in 1983, starting with his insertion into the Granville Street drug scene. ... His vivid, present-tense narration immerses readers into a gritty world of addiction and crime. "
~ Harry Charles, Library Journal
"Boucher's account does not represent vainglory, but that of nitty gritty life in the underworld, a world that few care much about and fewer yet will visit. He has done himself and the RCMP proud. "
~Peter M. German, Deputy Commissioner (ret'd. ), Royal Canadian Mounted Police
"Horseplay . .. leaves us shuddering at the life [Boucher] exposes. "
~ Ron Verzuh, The Ormsby Review
"Norm pulls no punches when he writes, but I don't want to give away too many spoilers from the book. Because of that, I humbly suggest that if you have any interest in True Crime, in Addiction, or in the real operations of Canada's undercover officers that you pick up a copy of this fascinating memoir. This should be required reading for all up and coming law enforcement personnel and for anyone working with people who have addictions. "
~ Amie's Book Reviews blog