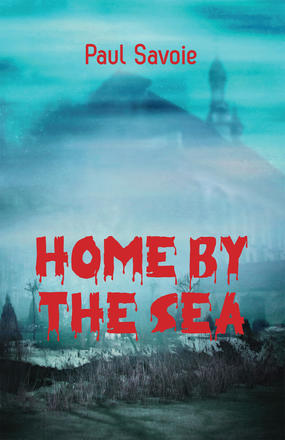 A car skids off a fog-covered road and rolls over. A woman emerges and helps her badly wounded husband out of the wrecked vehicle. Together they make their way down a narrow path which leads them to a large house near the sea, where are playing and friendly people welcome them ... Read more

A car skids off a fog-covered road and rolls over. A woman emerges and helps her badly wounded husband out of the wrecked vehicle. Together they make their way down a narrow path which leads them to a large house near the sea, where are playing and friendly people welcome them inside. But things are not as they seem. Something evil, deadly lurks behind the door. Once you find yourself inside these walls, there may be no way to ever get out. Beware.

Paul Savoie is one of the most prolific Canadian authors, writing in both French and English. Originally from Saint-Boniface, Manitoba, he has lived in Ontario since the early 1970s. He has written more than 40 books, including several collections of poetry, short stories, and translations. His poetry books, "Crac" and "Bleu bémol," both won the Trillium Book Award. Involved in the arts community for more than 25 years, Savoie also composes music for the piano. He has worked for the Canada Council for the Arts, the Ontario Arts Council, and the Canadian Television Fund. He lives in Toronto, Ontario.

Unmarked roads took unexpected turns near cliffs, dipped so suddenly that objects ahead appeared to be swallowed up whole, sucked into invisible chasms. Bev couldn't even be sure if they were in fact traveling on a road. There were parallel lines somewhere underneath, faint borders on either side. Everything else either emerged or dissipated at the front or rear end of the compact little container in which she found herself ensconced. Nothing else seemed to exist outside of this limited frame of reference. As far as she was concerned, nothing else mattered. The further they went along the craggy rolling hills, the darker Bev's mood became. She looked out the window, tried to be specific about what she saw. She wanted to name a plant, describe vegetation to herself, name aspects of the landscape. She longed for a passing bird, the sudden appearance of a plane in the sky. She searched a peculiar shade, an unusual color. Desperately needing to keep her mind occupied, she wanted to focus on concrete objects. Nothing registered. Everything moved so slowly all around her and yet remained incomprehensible to her There was so little I can hold onto. By now, the strange rock formations she had noticed earlier had disappeared. She was left with occasional glimpses of parched land, barren trees. She witnessed the outside world in much the same way a passenger on a train observes the outside landscape in fits and starts. She drifted in and out of consciousness, barely made sense of the collage of fleeting images on the window pane. "Where am I?" she wondered. Bev felt disconnected, removed from what had, until now, constituted her carefully constructed reality. Here, everything seemed insubstantial, ephemeral almost. The more she thought about it, the more she became upset with herself. She had been wrong in not arguing more forcefully against the trip. Though she had been opposed to the idea right from the start, she hadn't found the arguments to sway her husband from his resolve. Had she tried hard enough? Obviously not. He had been going on for days about his need for a new start. "Are you that unhappy?" she would ask him. "What does happiness have to do with it?" invariably came his gruff reply. She would try to reason with him. "If you need to start over, that means you want to leave something behind. " "You're missing the point altogether. " Yes, she was obviously missing the point. "I've got to get out of here," he would sometimes say out of the blue. "Then just go," she lashed out at him. "You have to come with me," he simply responded, without giving any explanation He had no specific reasons for wanting her to accompany him, could only state the urgency of the action itself. "We have to go," he insisted more forcefully each day. "Where in hell do you want us to go?" He had no answer. At night, he clung to her more and more. She had to wrench herself away from him. "You have to come with me," she pleaded each morning and throughout the day, either on the cell phone or in e-mail messages he constantly sent to her from work. "This is crazy," she tried to reason with him. "If we leave, we have to have a destination. " He had a look of consternation on his face. Obviously she was missing the point altogether. "Don't we?" The frown on his face provided her with his obvious answer. Her resistance grew weaker by the day. There was something in the way he insisted that made it almost impossible for her to deny him. Perhaps it was the tremulousness in his voice, implying vulnerability, or the emphatic tone, suggesting that what he was asking her, according to his skewed logic, made perfect sense, went beyond words. His eyes projected such certainty. A finality also. They had most definitely reached a turning point. She either had to believe him, or else let the whole matter drop once and for all. On some level she knew he was pleading with her. She could sense that his obsession with leaving wasn't just a whim. It was in fact a matter of life and death to him. Still she didn't completely trust him. He had tricked her before. She had to be on her guard. She was torn. A part of her wanted to view his behavior as mere theatrics while the other sensed that much more was at stake. The tragic side of his personality had such a strong appeal to her. She was a sucker for pathos. Tragedy brought out the best in her. Whenever disaster surfaced, she always caved in. She was now paying the price for her deficiency. She had submitted to his subtle bullying, had agreed to go with him on this insane ride, had stopped asking questions. The moment they left the city, he became sulky, had ripped the cell-phone out of her hand when she tried to call her mother to explain her absence, had unceremoniously thrown it out the window. She tried to focus on a reflection, any reflection, in the side-view mirror only managing to pick up patches of mist and fragments of branches. She couldn't shake the feeling that she had once again fallen into one of his traps.

Other titles by Paul Savoie