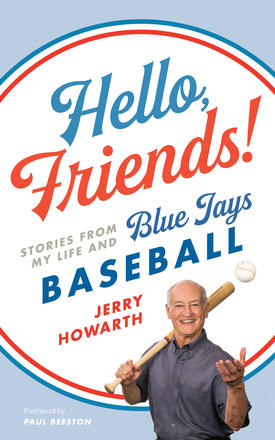 For 36 years, Jerry Howarth ushered in eternal hope each spring and thrived in the drive of each fall as the voice of the Toronto Blue Jays. In 1982, the lifelong ... Read more

For 36 years, Jerry Howarth ushered in eternal hope each spring and thrived in the drive of each fall as the voice of the Toronto Blue Jays. In 1982, the lifelong avid sports fan joined Tom Cheek as full-time play-by-play radio announcer for the Blue Jays, and for the next 23 years, “Tom and Jerry” were the voices of the franchise. Jerry became part of the fabric of a nation and a team, covering historic moments like the rise of the Blue Jays through the 1980s that culminated in back-to-back World Series Championships in 1992 and 1993. His Hall of Fame–worthy broadcasting career has been nothing short of legendary. When Jerry retired in February 2018, the tributes poured in and made one thing perfectly clear: Toronto baseball would never be the same.

Born in York, Pennsylvania, and raised in San Francisco, California, Jerry Howarth became a Canadian citizen in 1994. He currently lives in Toronto with his wife, Mary.

“Jerry Howarth is a Canadian national treasure and his story is tremendously inspiring. As joyful a person as I've ever met, Jerry made friends with millions of baseball fans during his long career and brought his warmth, humor, insights and descriptions into their living rooms. Readers of his story will have a further opportunity to revel in his positive outlook on life as well as countless fascinating memories. ” — Eric Nadel, Texas Rangers radio broadcaster

“Whether it was Blue Jays closer Tom Henke saying ‘Hellllllo, friends!’ when Jerry Howarth walked down the aisle on a team charter, an opposing player near the batting cage, or a 12-year-old self-broadcasting his sandlot game to his buddies, ‘Hello, friends!’ became Howarth’s trade mark. In fact, the two words are greeted with the same warmth and familiarity from coast to coast in Canada. ” — Bob Elliott, sports journalist

“For four years I was privileged to sit alongside Jerry — master storyteller, consummate professional, exemplary broadcaster. Now fans can pull up a chair and enjoy the excerpts from my partner, mentor, and friend. ” — Joe Siddall, Blue Jays broadcaster

“There HE goes but here he stays. Fortunately, Jerry and Mary and their boys came north to our country. That was truly a positive for the Blue Jays and baseball fans across Canada from coast to coast. ” — Brian Williams, Olympics commentator