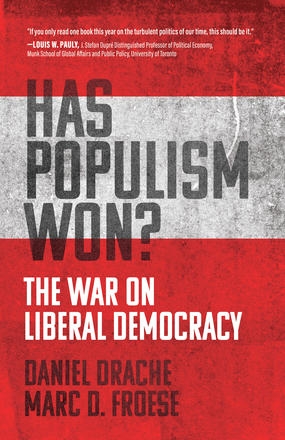 From Trumpian America to Putin’s nationalist Russia, and from Poland to the Philippines, rapid change and rising inequality ... Read more

From Trumpian America to Putin’s nationalist Russia, and from Poland to the Philippines, rapid change and rising inequality have fueled a retreat into tribalist nationalism fed by a fear of being left behind. Populist leaders reach into this fear, using it as a lever to power with empty promises of looking out for the little person and promising a return to national greatness. This is happening in countries spread across the globe and the political spectrum, arising in the right and the left alike, and recently brought into harsh relief against Putin’s brutal invasion of Ukraine. So why are we so susceptible to this pernicious political style at this moment? How did we get here? And more importantly, will we get back to more even-handed governments?

Filled with original research, political scientists Drache and Froese have written a chilling, compelling analysis of the rise of populism, and reveal what it will take to douse the flames. This is an essential read for anyone concerned about the encroachments on freedom and the rule of law around the world.

When Arthur Miller’s Death of a Salesman opened on Broadway in 1949, the titular salesman, Willy Loman, was instantly recognizable as the archetypal everyman of the postwar period. The character was so appealing to the theater-going public because he represented the ordinary individual beaten down by a capitalist system that treated him like an expendable cog in the profit machine. Today, the same is true of Walter White in TV’s Breaking Bad, another loser at rock bottom. Like Willy Loman, he was bullied and betrayed by the liberal order. He can’t catch a break. But where Willy accepted defeat, Walter fought back, taking his piece of the American dream by hook or by crook. Today, the people who have been knocked around won’t be denied. If they have to break the system to get what they believe they’re owed, then so be it.

The ethos of populist politics is one in which flawed characters have the moxie to beat the system and the drive to win the affection of the rest of us. We weep for Willy and cheer for Walter because we fear the same impersonal economic forces that drove them to such lengths will also steamroll us. Voters cheer for Bernie Sanders or Evo Morales because they represent the average person going up against the system, like Sarah Connor in Terminator or Frank Castle in The Punisher. The goal is to beat the rigged system or die trying, like Thelma and Louise or Bonnie and Clyde. Of course, the fact that all of these tragic figures are brought down by their own flaws tells you a lot about the narcissistic logic of identity politics in which populist strong men masquerade as competent leaders because appearance matters more than substance and character.

We need to ask one very essential question: If these leaders are so flawed, incapable, and corrupt, how have populist movements convinced so many people to rally around their cause? Populist activists tell a good story about how the system has been brought low by the unscrupulous elite. The populist leader responds by portraying himself as the opposite of those supposedly corrupt leaders. He wears the guise of the everyman, who is reviled by his betters but loved by underdogs everywhere. The thing about a good lie is that it contains a kernel of truth. And this is particularly true of the everyman persona. Most populist leaders are the sort of people who really believe themselves to have the common touch, like India’s Narendra Modi or Mexico’s Andrés Manuel López Obrador, and for the most part they do. Like-minded voters are seduced by their charisma and charm. Those who like them idolize them, and those who dislike them revile them. But there is no such thing as bad publicity. Even hatred has its uses in identity politics.

“Daniel Drache and Marc Froese have written an essential primer on modern populist authoritarianism. They unpack its origins, its internal dynamics, and its likely evolution, demonstrating why it poses a mortal threat to liberal democracy. We can’t defend the freedoms and institutions we treasure if we don’t accurately understand why they’re in danger. This book is a vital contribution to that defense. ” — Thomas Homer-Dixon, executive director, Cascade Institute, author of Commanding Hope: The Power We Have to Renew a World in Peril