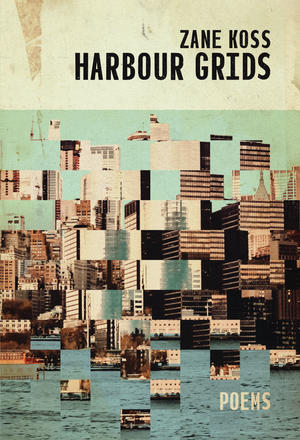 A visually and lyrically beautiful debut that celebrates the landscapes we take for granted.

Harbour Grids is a long poem in four parts that investigates ideas of community and belonging. Beginning as a meditation on the surface of New York Harbor, the poem radiates outward through ... Read more

A visually and lyrically beautiful debut that celebrates the landscapes we take for granted.

Harbour Grids is a long poem in four parts that investigates ideas of community and belonging. Beginning as a meditation on the surface of New York Harbor, the poem radiates outward through issues of labour, location, history, belonging, and subjectivity. How do we experience our complex relations to the world we live in? Harbour Grids seeks to answer this question by combining the sonic texture and investigative poetics of Daphne Marlatt, the improvisatory spirit and ethical engagement of Fred Wah, the experimental attention to the structures of language of Nasser Hussain, and the dazzling sense of visual space of Jordan Abel.

Zane Koss is a poet, translator, and scholar. Born and raised in Invermere, B.C., he lives between Brooklyn, NY, and Guelph, ON. Zane is a PhD candidate at New York University, where he teaches and researches Canadian, Mexican, and U.S. poetry in the 1960s and 1970s. He has previously published five chapbooks of poetry with above/ground press, Simulacrum Press, The Blasted Tree, and Publication Studio Guelph, and has also taught at McGill University, where he completed a Master's in Canadian poetry.

"A meditation both visual and lyric, pointillist and staccato, accumulative and stretched out as a singular line between regular points. "—rob mclennan

"With his grids, Zane Koss offers an original form that allows for a meditative reading (and, I would assume, writing), similar to the haiku, but without its unity. Such a form allows both writer and reader to let their perceptions and verbal questions be, to notice them, to make note of them. "—Jérôme Melançon, The Temz Review

"In Harbour Grids, lines of shimmering ‘s’ phonemes ripple across fragmentary layers of New York’s urban development from harbour to immigrant neighbourhood. Zane Koss has created a stutter-statement most singular in its embrace of word and silence, visual image and social critique. To read Harbour Grids is to experience this moving interplay between surface and depth. "—Daphne Marlatt, author of Intertidal and Steveston

"The grid is one of modernity’s core forms and concepts—the fabricated space fashioned for plotting its measured trajectories. In Harbour Grids, Zane Koss’s moving minimalist intervention, the grid is both constraint and focalizer. Through the shimmering veil of infrastructure, nation, and language, “scattered / across the / shifting surface” of the page, we gather glimpses of the natural world, welcome those who have navigated the border’s rigid nets, and hear languages other than a monolithic English. The result is a near perfect balancing of form and formlessness—of urban enclosure, and a willful swerve onto the open common. "—Stephen Collis, author of A History of the Theories of Rain and Decomp

"The grid referred to in the title of Zane Koss’s exquisite Harbour Grids is a pattern of visual and sonic ripples—the hiss and shimmer of a living and lived world. The grids are represented by parallel rows of the letter S, regularly placed with open space between them. At diverse S’s, observed details surface, fleeting (they are gone from the next page, the next moment), but lasting long enough to disturb the pattern and excite the mind. There is nothing in Harbour Grids that’s inert. And with each perceived glint, each registered sound, a harbourscape unfolds: wavelets, tidal lift and fall, boats and ships, streets and shops, vehicles, pedestrians. And human social life burbles on, speaking its different languages. There’s no reigning subjective presence here—no singular “I. ” Subjectivities are part of the distributed stuff of the world. But Harbour Grids is nonetheless a powerfully affective book, suffused with melancholy and some kind of accompanying pervasive wisdom. It’s a beautiful book. " —Lyn Hejinian, author of My Life and The Language of Inquiry

"From its opening page onward, Zane Koss’s Harbour Grids takes us into a floating world of letters and words arranged on the aqueous white surface of the rectangular page. Words enter this world as if by accident, washed up among the sounds and shapes of the letter “s” repeating again and again in four-line square grids on the white page, detailing what Koss calls his “phenomenological investigation of the surface of New York harbor” perceived in fragments. “s” as the shape and sound of waves moving across water, punctuating the words and phrases that appear as if out of the fog or night or from “behind freighters” or even “a cosmos of paths . . . submerged”; “s” as breath, the reader’s and listener’s breathing, “one shimmering plane. .. among others. .. in the eyes. .. a shard of light” radiating out across the lines of the poem and the space of the place itself. "—Stephen Ratcliffe, author of sound of wave in channel and Selected Days