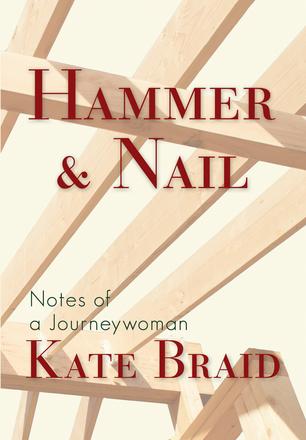 In 1977, Kate Braid began work as one of the first women to stumble (literally) into construction. Since then, feminism, the #MeToo movement, pay equity legislation and other efforts have led to more women in a wider variety of careers. Yet, the number of women in blue-collar ... Read more

In 1977, Kate Braid began work as one of the first women to stumble (literally) into construction. Since then, feminism, the #MeToo movement, pay equity legislation and other efforts have led to more women in a wider variety of careers. Yet, the number of women in blue-collar trades has barely shifted--from three percent to a mere four.

In Journeywoman, Braid told a personal story of working almost exclusively with all-male construction crews. In Hammer & Nail: Notes of a Journeywoman, Braid returns to the trades with courage, compassion, and humour. Connecting her lifetime of experiences as a construction worker, as well as an educator and writer, Braid reflects on the culture of labour and recalls the thrill of realizing her own skill and capabilities.

Through stories, articles and speeches, Hammer & Nail sheds new light on our ideas of traditional gender roles--and how those ideas change in small but profound moments of gentleness, strength, humility and clarity on the job. Hammer & Nail is a thought-provoking collection of the highs and lows, the laughs, the heartaches and some of the lessons of Braid's journey.

Kate Braid worked as a receptionist, secretary, construction labourer, apprentice and journey-carpenter before finally “settling down” as a teacher. She has taught construction and creative writing, the latter in workshops and also at SFU, UBC and for ten years at Vancouver Island University.

Braid is the author of the poetry books, A Well-Mannered Storm: The Glenn Gould Poems (2008), Covering Rough Ground (1991), To This Cedar Fountain (1995), Inward to the Bones: Georgia O’Keeffe’s Journey with Emily Carr (1998), and Elemental (2018). In 2005 Braid co-edited, with Sandy Shreve, In Fine Form: The Canadian Book of Form Poetry. It was re-released with a second edition in 2016 as In Fine Form: A Contemporary Look at Canadian Form Poetry. Her 2012 memoir, Journeywoman: Swinging a Hammer in a Man’s World, tells the story of how she became a carpenter in the face of skepticism and discouragement. A revised edition of her award-winning poetry book Covering Rough Ground, Rough Ground Revisited, was published by Caitlin Press in 2015. In 2020, Braid released a collection of essays called Hammer & Nail, with Caitlin Press.

In 2012 Kate Braid was declared one of Vancouver’s Remarkable Women of the Arts. In 2015 she was awarded the Mayor of Vancouver’s Award for the Literary Arts for showing leadership and support for Vancouver’s cultural community, and in 2016 she received the Pandora’s Collective BC Writers Mentor Award. She lives in Victoria, BC.

Other titles by Kate Braid