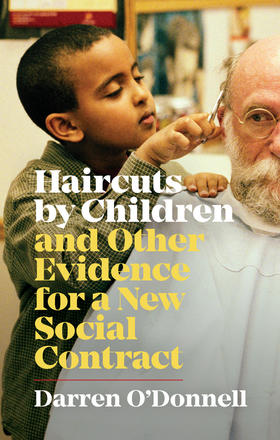 We live in an ‘adultitarian’ state, where the rules are based on very adult priori- ties and understandings of reality. Young people are disenfranchised and power- ... Read more

We live in an ‘adultitarian’ state, where the rules are based on very adult priori- ties and understandings of reality. Young people are disenfranchised and power- less; they understand they’re subject to an authoritarian regime, whether they buy into it or not. But their unique perspectives also offer incredible potential for social, cultural and economic innovation.

Cultural planner and performance director Darren O’Donnell has been collaborating with children for years through his company, Mammalian Diving Reflex; their most well-known piece, Haircuts by Children (exactly what it sounds like) has been performed internationally. O’Donnell suggests that working with children in the cultural industries in a manner that maintains a large space for their participation can be understood as a pilot for a vision of a very different role for young people in the world – one that the UN Committee on the Rights of the Child considers a ‘new social contract. ’

Haircuts by Children is a practical proposal for the inclusion of children in as many realms as possible, not only as an expression of their rights, but as a way to intervene in the world and to disrupt the stark economic inequalities perpetuated by the status quo. Deeply practical and wildly whimsical, Haircuts by Children might actually make total sense.

‘No other playwright working in Toronto right now has O’Donnell’s talent for synthesizing psychosocial, artistic and political random thoughts and reflections into compelling analyses . .. The world (not to mention the theatre world) could use more of this, if only to get us talking and debating. ’

Darren O'Donnell is a novelist, essayist, playwright, director, designer, performer and the artistic director of Mammalian Diving Reflex. His most recent books include a novel, Your Secrets Sleep With Me, and Social Acupuncture: A Guide to Suicide, Performance and Utopia . Previously published drama includes Inoculations (which contains White Mice, Over, Who Shot Jacques Lacan?, Radio RoosterSays That's Bad ) and pppeeeaaaccceee . Through Mammalian Diving Reflex, he stages interventionist performance art, including Haircuts by Children, Slow Dance with Teacher, Ballroom Dancing and the Children's Choice Awards .