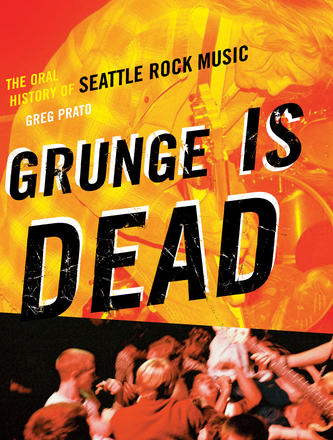 Grunge Is Dead weaves together the definitive story of the Seattle music scene through a series of interviews with the people who were there. Taking the form of an “oral” history, this books contains over 130 interviews, along with essential background information from ... Read more

Grunge Is Dead weaves together the definitive story of the Seattle music scene through a series of interviews with the people who were there. Taking the form of an “oral” history, this books contains over 130 interviews, along with essential background information from acclaimed music writer Greg Prato.

The early ’90s grunge movement may have last only a few years, but it spawned some of the greatest rock music of all time: Pearl Jam, Nirvana, Alice in Chains, and Soundgarden. This book contains the first-ever interview in which Pearl Jam’s Eddie Vedder was willing to discuss the group’s history in great detail; Alice in Chains’ band members and Layne Staley’s mom on Staley’s drug addiction and death; insights into the Riot Grrrl movement and oft-overlooked but highly influential Seattle bands like Mother Love Bone/Andy Wood, the Melvins, Screaming Trees, and Mudhoney; and much more.

Grunge Is Dead digs deeper than the average grunge history, starting in the early '60s, and explaining the chain of events that gave way to the grunge movement. The end result is a book that includes a wealth of previously untold stories and insight for the longtime fan, as well as its renowned story for the newcomer. Grunge Is Dead collects the whole truth of grunge music in one comprehensive volume.

Greg Prato is a Long Island, New York-based writer, who regularly writes for All Music Guide, Billboard.com, and Classic Rock Magazine (among others).

As my high school days were drawing to a close, there was certainly something bubbling in the hard rock world. Bands like Faith No More, Jane’s Addiction, Living Colour, and the Red Hot Chili Peppers were showing that not all rock bands had to sing about “fast cars and fast women” or dress like goofball spandex cowboys. Having only attended strictly big arena rock shows up to this point, I didn’t know quite what to expect when I agreed to attend a show on Saturday, March 17, 1990, at a club called L’Amour in Brooklyn, New York. The two main reasons I purchased a ticket for this three-band bill were to see the aforementioned Faith No More, as well as sci-fi metal headliners Voivod. After FNM’s fantastic set, the next band, which I was least familiar with, came onstage.

The singer didn’t wait long — upon the first notes of the opening number, he was climbing over the crowd on pipes attached to the ceiling (if my memory serves me correctly — already shirtless, and wearing shorts that were completely covered in silver electrical tape), before dropping himself into the sea of “moshers” below. The guitarist looked like something out of Cheech and Chong, with a full-on beard, and his eyes seemingly constantly closed — as if he were reaching a state of nirvana playing monstrous Sabbathy riffs. The bassist’s large mop of curly hair bobbed in time to the music, while the drummer bashed out some impressively complex yet primal beats. This, my friends, was my introduction to the mighty Soundgarden.

Needless to say, soon after, I was a major convert, buying just about every Soundgarden recording that I could get my hands on, and reading all the interviews on the band that I could gather. And in most of the articles, it was mentioned that there were other similarly styled bands from Soundgarden’s hometown — Seattle — that were on their way up the ladder as well. Over the next year or so, it appeared as though each month, there was a new band from the Seattle area to discover — Mother Love Bone, Alice in Chains, Tad, Temple of the Dog, Mudhoney, the Melvins, the Screaming Trees, etc. And of course, when Nirvana and Pearl Jam hit, the rock world had thankfully shifted towards music that was both honest and real. And along with it came the word that would forever be associated with the movement: grunge.

While the movement didn’t turn out to be as long lasting as many figured it would, what it packed into a four-year period (1990-1994) was pretty darn extraordinary. How many songs from this period are still being played on the radio? How many of these albums sound as great today as when they first came out, continue to sell, and are still being discovered by younger generations? I rest my case. It may have only lasted a few years, but for a few brief and shining moments, grunge certainly shifted the direction of culture (and even fashion), and brought in an unmistakable feeling of change — just as the ’60s hippie and ’70s punk movements had.

The original idea for doing this book came about when I was doing a Soundgarden article for Classic Rock magazine back in 2004. While interviewing the group’s early producer, Jack Endino, he mentioned that almost every single article being written about grunge bands nowadays were by writers who were not from the Seattle area, yet were giving their “revisionist take” on what happened. Which got me thinking … what if a book was comprised of nothing but quotes from the actual people that experienced the movement firsthand, tracing it from its very beginning to its end? In other words, letting them tell the entire story as it unfolded (with only chapter intro paragraphs from yours truly). Nearly 130 interviews later, here we are.

“Grunge Is Dead offers a definitive oral history of grunge … Prato, a contributor to All Music Guide and Billboard. com, offers accounts from more than 125 musicians (with the exception of Nirvana), record label owners, and scenesters. The book traces grunge’s meteoric rise out of the 1980s hard-core punk scene-and its decline owing to the growing prevalence of heroin use. ” — Library Journal Express

“Prato really earns his stripes when he gets his hands dirty tracing the roots of this sound to the mid-’60s Northwest, with the Sonics and the Wailers, and up to the punk rock and post-punk years of the U Men, the Fartz and undeniable outside influences like Black Flag, DOA, Flipper, Butthole Surfers, Sonic Youth and Redd Kross. ” — Montreal Mirror

“By approaching the subject as an oral rather than a written account, [Prato] gives the story back to Seattle. .. a multifaceted portrait of the music that pretty much defined the decade. ”
— Blurt Magazine

Other titles by Greg Prato