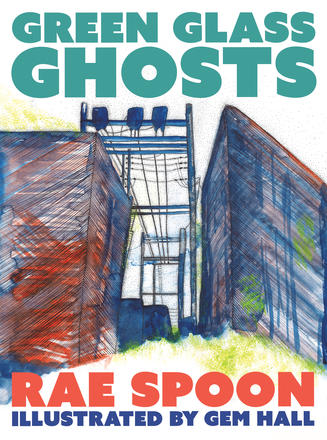 From writer and musician Rae Spoon: a rollicking yet introspective young adult adventure about screwing up, finding yourself, and forging a new life on your own.

At age nineteen in the year 2000, the queer narrator of Green Glass Ghosts steps off a bus on Granville Street in ... Read more

From writer and musician Rae Spoon: a rollicking yet introspective young adult adventure about screwing up, finding yourself, and forging a new life on your own.

At age nineteen in the year 2000, the queer narrator of Green Glass Ghosts steps off a bus on Granville Street in downtown Vancouver, a city where the faceless condo towers of the wealthy loom over the streets to of the east side where folks are just trying to get by, against the deceptively beautiful backdrop of snow-capped mountains and sparkling ocean.

Armed with only their guitar and their voice, our hopeful hero arrives on the West Coast at the beginning of the new millennium and on the cusp of adulthood, fleeing a traumatic childhood in an unsafe family plagued by religious extremism, mental health crises, and abuse in a conservative city not known for accepting difference. They're eager to build a better life among like-minded folks, and before they know it, they've got a job, an apartment, openly non-binary friends, and a new queer love, dancing, busking, and making out in bars, parks, art spaces, and apartments. But their search for belonging and stability is disrupted by excessive drinking, jealousy, and painful memories of the past, distracting the protagonist from their ultimate goal of playing live music and spurring them to an emotional crisis. If they can't learn to care for themselves, how will they ever find true connection and community?

The haunting illustrations by Gem Hall conjure the moody, misty urban landscape and represent a deep collaboration with the author based on their shared experience of seeking safety, authenticity, and acceptance on the West Coast. Green Glass Ghosts is an evocation of that delicate, aching moment between youth and adulthood when we are trying, and often failing, to become the person we dream ourselves to be.

Rae Spoon is a non-binary musician, producer, and author from Treaty 7 (Calgary) living on Lekwungen territory (Victoria). Rae is the author of the Lambda Literary Award finalist First Spring Grass Fire (2012), and co-author (with Ivan Coyote) of Gender Failure (2014). Rae was awarded a Dayne Ogilvie Prize Honour of Distinction by the Writers' Trust of Canada. They are the subject of a National Film Board documentary entitled My Prairie Home (2013), which screened at film festivals internationally, including the 2014 Sundance Film Festival. They have released ten albums for which they have been nominated for two Polaris Prizes and a Western Canada Music award. They are the founder of Coax Records, dedicated to work by marginalized musicians traditionally underrepresented in the music industry.

Gem Hall is an itinerant interdisciplinary artist of mixed Romani/British heritage currently based on Coast Salish lands. Gem is interested in creative work as a means of survival and language to express stories & songs of resilience, recovery, diaspora, and the magic of storytelling and witnessing. With a background in DIY/zine culture & queer and trans community organizing, they use illustration, textile work, writing, harp playing, tarot reading, and plant medicines to hold liminal spaces between worlds and ways of being.

This book is wild and familiar, not unlike young queer lust, love, or existence. It perfectly encapsulates the balances between being wide-eyed and resourceful, running away and running to. Spoon and Hall clearly know that survival is a messy landscape, with as many hands pulling you down as there are lifting you up. Reading this book is being lifted up, a firm reminder of still being here. -Tara-Michelle Ziniuk, editor (THIS Magazine), writer (Whatever, Iceberg, Somewhere to Run From, Emergency Contact)

Glass Ghosts is hopeful and raw in its honest depiction of how survivors experience and interface through their filters, the cautionary tale of 'medicine' becoming poison, how we sometimes need to be taught self-care, patiently by loving Others, those surrogate strangers, gently moving us toward trust, as we imperfectly seek stability on an ever-shifting coastline. -Imogen Di Sapia, associate member, European Roma Institute for Arts and Culture (ERIAC); writer/textile artist (The Selkie: Weaving and the Wild Feminine)

Rae Spoon and Gem Hall's Green Glass Ghosts documents a time that hasn't been written much about, and needs to be - a particular kind of working-class, queer/trans kid life in early 2000s Vancouver. Spoon and Hall craft a portrait of the many kinds of ghosts - of trauma, colonization, and displacement - in that place and time, and the messy, persisting dollar pizza-eating queer and trans kids trying to get by and make something different, even if we don't know how. Hall's artwork does a beautiful job of capturing this place and all the beings on both sides of the veil who inhabit this queer space of becoming. -Leah Piepzna-Samarasinha, author of Care Work and Dirty River

Lonely and spectral and hopeful. A book about being young and queer. About trying to find community, create a home, and stay in the world despite old trauma and new harms in the places you seek safety. A tether for when you feel yourself floating away. -Jaime Burnet, musician (Sockfoot), writer (Crocuses Hatch from Snow)

Green Glass Ghosts chronicles the realities of queer protagonists navigating love, health, addiction, and healing in Vancouver on the cusp of the new millennium. The chaos in survival is documented by Rae Spoon's iconically poetic prose and illustrated by Gem Hall's bold yet haunting ink drawings. Green Glass Ghosts walks us through both the grit and camaraderie of underworld subcultures, with art and storytelling that doesn't alienate but encourages us to normalize our disarray. -Cristy Road Carrera, author of Next World Tarot, Spit and Passion, and Choked Up

Green Glass Ghosts is a compelling coming-of-age story that is so specific and yet so universal. Every queer and trans person will recognize themselves, their friends, someone they've known, loved, and lost in this novel. The collaboration between Gem Hall and Rae Spoon is tender, haunting, raw, honest, asking of us to not only look back at our past selves but also dream up different possibilities for our future. This is a book to hold in our hearts. -Kama La Mackerel, author of ZOM-FAM