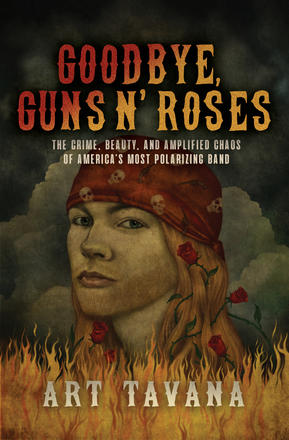 Goodbye, Guns N’ Roses transports the reader into a mind-altering trip through the colors, scandals, nihilism, and mythology that make Guns N’ Roses so much more than another “hair metal” band.

A valentine and a breakup letter to one of rock’s most controversial ... Read more

Goodbye, Guns N’ Roses transports the reader into a mind-altering trip through the colors, scandals, nihilism, and mythology that make Guns N’ Roses so much more than another “hair metal” band.

A valentine and a breakup letter to one of rock’s most controversial bands.

Goodbye, Guns N’ Roses is a genre-rattling attempt to explain the appeal of America’s most divisive rock band. While it includes uncharted history and the self-lacerating connoisseurship of a Guns N’ Roses fetishist, it is not a recycled chronicle — this book is a deconstruction of myth, one that blends high and low art sketches to examine how Guns N’ Roses impacted popular culture. Unlike those who have penned other treatments of what might be considered a clichéd subject, Art Tavana is not writing as a GNR patriot or former employee. His book aims to provide an untethered exploration that machetes through the jungle of propaganda camouflaging GNR’s explosive appeal.

After circling the band’s three-decade plundering of American culture, Goodbye, Guns N’ Roses uncovers a postmodern portrait that persuades its viewer to think differently about their symbolic importance. This is not a rock bio but a biography of taste that treats a former “hair metal” band like a decomposing masterpiece. This is the first Guns N’ Roses book written for everyone; from the Sunset Strip to a hyper-digital generation’s connection to “Woke Axl,” it is a pop investigation that dodges no bullets.

Art Tavana (he/him/his) is an award-winning writer and former columnist at LA Weekly and Playboy. He has written for Billboard, Pitchfork, Spin, The A.V. Club, Paste, Consequence of Sound, Arc Digital and Vice. He resides in the suburbs of Southern California.

“We do shoot straight from the hip; we’re very realistic. We’re not putting up some facade to sell records,” Slash told BAM in November 1987, just as the band was beginning to aggressively sell themselves to a national audience. For anyone to suggest Guns N’ Roses weren’t being strategic when it came to their PR, I refer you to Axl Rose’s letter to Music Connection’s Karen Burch in 1986, where he protests the magazine’s refusal to be an “ally,” claiming that Burch had agreed to give Guns N’ Roses editorial and photo approval (a somewhat ludicrous claim). This would have been unprecedented. Axl described the cover photo taken by photographer Kristen Dahline as a “hideous representation of the artist’s abilities as a photographer. ” Burch responded: “As for the foul taste in Rose’s mouth—may I suggest he try a little soap to wash away what appears to be a severe case of sour grapes. ” This was the beginning of Axl Rose’s irrational war with the media.

To understand the roots of Guns N Roses’ anti-glam marketing strategy, it’s important to examine the cover of the first Rolling Stones album, released on April 16, 1964, where each member is wearing a different outfit. You see a shadow painted over the eyes of each member to form a fatalistic stare. The background is black. They’re a band with a very clear expiration date. Compare that to the Please Please Me album cover of the Beatles, from 1963, where they stare down at us from a brightly illuminated stairwell in vivid colors, wearing matching coffee-colored suits that make them look like door-to-door salesmen who were, as Paul McCartney once said, “spokesmen for a generation. ” The Rolling Stones were “psychic masturbation” for teenagers who felt suffocated by postwar conformity. “Rejecting matching clothing was one step,” said Stones’ manager Andrew Loog Oldham.

The outfits of each member of Guns N’ Roses were never synchronized. Their album covers were designed as symbols of insubordination, not cooperation. Compare the cover of Appetite for Destruction (both the original Robert Williams painting and the Celtic cross) to Poison’s 1986 debut, Look What the Cat Dragged In, which is a sardonic drag-queen parody of the Beatles’ cover for Let It Be. On the Poison debut, each member occupies their own floating mirror, in full makeup, like a sample photo album you’d find at a one-hour photo in a shopping mall. In contrast, the Appetite for Destruction covers are both steeped in symbols of death and dystopia. For Guns N’ Roses, each cover or band photo is a representation of their anti-glam image. It is never a centerfold for a teen gossip magazine. They never appear in photo shoots with the coordinated maximum-impact advertising of Poison (who were the “boy band” of metal).

Comparing the Guns N’ Roses aesthetic to Poison is like comparing a sunny Gene Kelly musical to the men’s room brawl from The Warriors (1979), which feels like a surrealist-pop accompaniment to “Welcome to the Jungle. ” These are important comparisons to make for a variety of reasons, the most immediate being the writer’s need to determine how the iconic Guns N’ Roses logo—depicting two conjoined Colt pistols wrapped in bleeding roses and vines, attached to a giant bullet—became as culturally pervasive as John Pasche’s tongue logo for the Rolling Stones, AC/DC’s thunderbolt, and Madonna’s blonde hair in 1985, the year Bette Midler introduced her at Live Aid as a “woman who pulls herself up by her bra straps … and who has been known to let them down occasionally. ” A year later, gigoloing for pizza money on the streets of Hollywood, Guns N’ Roses inspired the Kelly Bundy’s of America to drop their bra straps with the speed of the Dow Jones Industrial Average on Black Monday, October 19, 1987, when it fell 508 points, five days before Guns N’ Roses would make their debut on MTV as a rejection of the “new wave” that had made MTV so fashionable.