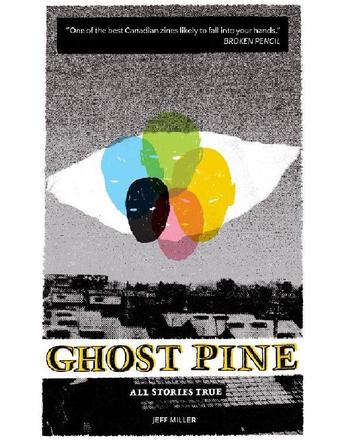 Ghost Pine: All Stories True offers thirteen years worth of sparkling true stories from the life of author Jeff Miller, compiling the best of his long-running zine. From his youth in suburban Ottawa in the late 1990s, to travels across Canada and North America and his current ... Read more

Ghost Pine: All Stories True offers thirteen years worth of sparkling true stories from the life of author Jeff Miller, compiling the best of his long-running zine. From his youth in suburban Ottawa in the late 1990s, to travels across Canada and North America and his current home in Montreal, Miller’s stories are equal measures funny and sad, nostalgic and unsentimental, punk rock and grandparents.

Jeff Miller has published the zine Ghost Pine since 1996, selling nearly ten thousand copies through independent channels. Miller's zine has received strong reviews from various underground media outlets over the past decade. His writing has also appeared in The 2nd Hand, Broken Pencil, Zine Yearbook and The Art of Trespassing (Invisible Publishing). Born and raised in Ottawa, he has lived in Montreal for the past decade, where he continues to write.

“Whether you still hold dear the smell of photocopier toner in the internet age, or this is your first exposure to the zine, the stories of Ghost Pine stick long after the last page is turned. ”—This Magazine

"Anyone to whom suburbs 'became the symbol of everything wrong in the world,' who belonged to a high school 'Social Justice Club,' or who marches when 'evil politicians come to town' will relate to and chuckle at these slices of youthful life. "—Montreal Review of Books

“Miller slows the progression . . . of growing up to examine its transformative passages. ”—The Coast

“Miller repeatedly does what zine writers are supposed to do: he brings us into his world. He takes us where he’s been and where he’s going. ”—Razorcake

“Jeff Miller’s writing in Ghost Pine over the past thirteen years stands out amidst the scribbling crowd. ”—Maximumrocknroll

“Pithy and charming, Miller’s voice is an engaging one, and reading this you’ll feel as though you’re with a friend, and that the two of you are out together, taking note of all to see. ”—Ottawa XPress

Other titles by Jeff Miller