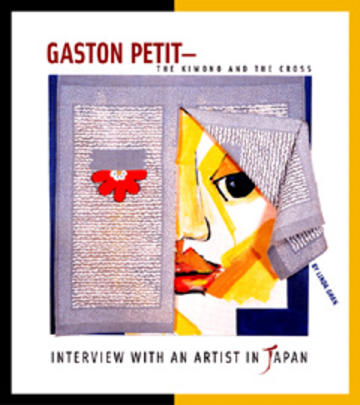 Gaston Petit - The Kimono and the Cross

Gaston Petit - The Kimono and the Cross

When most of us consider life in the priesthood, a cloistered, removed existence comes to mind. But Gaston Petit belies the stereotype. A widely travelled Dominican priest, Petit has earned an international reputation for his art, achieving renown in painting, stained glass, ... Read more

When most of us consider life in the priesthood, a cloistered, removed existence comes to mind. But Gaston Petit belies the stereotype. A widely travelled Dominican priest, Petit has earned an international reputation for his art, achieving renown in painting, stained glass, church design, silkscreen and wood block prints, sculpture and mural installation, with works in major museums and collections throughout the world. While he has been stationed in Japan since 1966, Petit retains strong Canadian roots, spending half the year on the north shore of his beloved St. Lawrence, and half the year in Tokyo. Petit seamlessly combines East and West, exploring the artistic and spiritual traditions in both. This is a fascinating portrait of an artist, a traveller, a seeker. Interviewer Linda Ghan takes Petit from his rural beginnings in Shawinigan to his peripatetic existence today, and we come to know a man whose grand curiosity brings joy and beauty into the world. Colour reproductions highlight some of Petit's rich and varied oeuvre.

ART: NOSTALGIA FOR GODWhen you design for a church—a mural, stained glass windows, a tabernacle—you are thinking of a religious site. In that sense, the work is religious. Do you consider your other work, paintings and prints, for instance, as religious?You are not the first to ask this question. In 1981, my superior was visiting in my studio. I was working on L'oreille au guet, "The Listening Ear. " He watched me work, and finally he asked,—with some amusement, actually: "When are you going to do religious paintings?" I could have answered, I suppose, in philosophical terms. This—he is a trained philosophical scholar, after all—he would have understood quite easily. Alex von Jawlesky, for example, defines art as nostalgia for God. Art is nostalgia for God?The search, the creation, is a way to go back to God, the Alpha, to reach God, the Omega. As both an artist and as a man, I have a nostalgia for home, a craving. God can never be defined or narrowed down to any fixed notion or point: this nostalgia becomes the push, the motor, which compels the artist—the artist in me—to work, to work, and work again, never able to achieve the defining image which contains all the others. Only God contains all. An impossible search, after all. It is not possible to appreciate and understand all of God's riches, or to understand the Mystery or the Finality. No religion can. Each religion depends on the culture out of which it was born. But you didn¹t say this to him. No. I went directly to the point: the painting we were standing in front of. "Observe well," I said, "the elements of this canvas. " Then I sent him home: I sat down and a few hours later, I handed him a treatise. In the first place, in full centre, we see a dog sitting in a square, ostensibly empty. Just white space. The dog is framed, "separated" from his surroundings, but whether or not the square is "empty" is, as we say in Japan, a matter of interpretation. In fact, it is not empty, but free of obstruction, and the dog seems very attentive to what is happening outside his space. He is listening. And waiting for the burst of song from the white bird perched on the doorway which frames the square in which he sits. Those familiar with the iconography would understand that the bird symbolizes the Spirit which blows when and where it wants. According to a Dominican legend, Saint Jeanne d'Aza, while she was awaiting the birth of the child who became St. Dominique, saw, in a kind of daydream, a dog emerge from her breast carrying a flaming torch in his mouth. In medieval times, with a certain play on words, the Dominicans were called "Domini Canis," dogs of God. You laugh. You are surprised that we can make jokes about ourselves? Really, the expression is not new. It is found in St. Bernard's writings as long ago as the 10th century. I'm not laughing at. I'm impressed by the sense of humour. So what does he hear, this bearded dog sitting in the middle of his square?Human conversation. The conversation of women. Woman, medieval or contemporary, the pious and the profane, have a need to talk, to be listened to. We have both the medieval pious women and the prostitute in this painting. In Picasso's Les Demoiselles d'Avignon, Les Demoiselles were, as we know, the "girls," the prostitutes on the street of Avignon in Barcelona. The dog is listening to the world, to these women outside his circle, remembering his master's injunction "to be in this world and not of this world," always attentive to the mystery expressed at the beginning of time and often symbolized by the humble apple. Actually, the apple in the painting, dangled by one of the pious women, is for me the most striking part of the canvas. The apple swings like a pendulum, like a measure, in front of shadow figures, oriental silhouettes who are behind shoji, opalescent paper windows. Meaning?Meaning that the mystery addresses itself equally to the Orient which is still largely unaware of the mystery of salvation. So these shadow figures dance, unaware, separated from the reality of salvation by this thin paper. Another symbol. Illusion's mask. How does one tear down this mask of illusion, open the doors which bring salvation? Are my paintings religious? I would say so, but each work lives differently depending on the viewer. It is for you to tell me.

“Gaston Petit is a Quebec artist who has produced hundreds of paintings, lithographs and art objects. So why have many culture minded Quebecers never heard of him?One obvious reason is that for the last 40-odd years, he has worked in Tokyo. He's well enough known and admired in Japan that the emperor's cousin commissioned him to design some stained-glass windows. But Petit, who's now 72, has another vocation as well. He's a high ranking Roman Catholic Dominican priest. There's probably not another Shawinigan-born boy who's gone quite so far. (Well, maybe one. ) Certainly no Shawinigonian who speaks better Japanese. If the Dominican order ever needed a poster boy, Petit could fit the bill. He personifies the Dominicans' philosophy, described by Petit in this book, of balance between meditation and action. Athletic and handsome as a teenager and, by his own account, popular with the girls, at 17 he freely chose the religious life. Secular-minded people who despise rules of conduct of any kind might think that the constraints of a religious order limit one from living life to the full. Petit's case is a pretty good argument to the contrary. For a quick, perceptive mind like his, what could be more stimulating than the order's classical education (Greek and Latin) and a chance to travel widely, not only to Japan--a destination he targeted early on--but to many fascinating parts of the world like INdia, Easter Island, and pre-Taliban Afghanistan. His vocation opened doors to hundreds of friends (including a reunion with his former Shawinigan classmate, Jean Chretien) and scores of intriguing, famous people, like the Dalai Lama. It's evident from his words in the book that Petit has an engaging personality and likes to socialize (a trait shared with his father, a salesman). These qualities were confirmed by another long-time Tokyo resident from Quebec who knew Petit there and who recalled for his review that he was also adept at promoting himself and his artistic career. Petit may be a priest, but he's not unworldly. Certainly, the book shows evidence of his gift for diplomacy, a useful skill in Japan, where, as Petit explains, etiquette has a myriad nuances. Natural-born iconoclasts will savour the moments, however, when Petit is outspoken and revisionist, as when he chides St. Augustine for being the culprit who mistakenly identified the evil in Eve's apple as sex. Christianity, Petit admitted, as yet to survive that one. At the same time, there are many instances when Petit scurries to act as a Christian apologist. Here his arguments sound forced, as though he's trying hard to reconcile Christianity with the Far Eastern theologies, like Buddhism, that he so admires. The reader senses--and Petit admits--that he could say much more on these subjects if he had the chance. This brings us to the book's major weakness: it's format. It's simply a transcribed series of question-and-answer sections. Everything Petit said appears to get equal treatment, and a lot of banal information got left in. Weak editing has also left in long passages in which Petit sounds like an art lecturer (which he was) or like Joseph Campbell explaining the significance of mythological symbols. More than once Petit questioned whether what he'd just said was worth quoting. Smart man. Judicious editing in the photo selection, too, might have given us fewer Gaston-here, Gaston-there snapshots. Better to have satisfied readers' curiosity by showing the Dominican mission in Tokyo's Shibuya district, where he has lived. A small number of colour reproductions reveal some of his work's obvious stylistic influences: fauvism, surrealism, abstract expressionism. On this evidence, his work, though intelligent and sensitive, apparently never achieved and unmistakably personal style. It takes nothing away from his accomplishments to say that he's a derivative rather than a seminal artist. Although Petit speaks eloquently about contemporary aesthetics, his own approach to art is the medieval one in which art serves liturgical purposes. His art objects are intended for use rather than for isolated viewing, which explains his numerous commissions for churches: stained-glass windows, liturgical garments and murals like the 3,500-kilogram bronze made for a church in Nagasaki. In recent years, Petit has spent summer months in Quebec. On May 25, an exhibition of his work opens in Trois-Rivieres. If you can't make it there, you might catch his show in Tokyo in September. In the meantime, this book, despite its flaws, lets us glimpse an unusual Quebecer of high culture and inspiring humanitarianism. How comforting to know that such people are among us. ”—Victor Swoboda,The Montreal Gazette

Other titles by Linda Ghan